I hope you can see this... too cute.  And honestly, I didn't know that - or just forgot it, like so many other things!
Scribbled by Astrids dragon at 17:11 1 comment:
Email ThisBlogThis!Share to TwitterShare to FacebookShare to Pinterest
Labels: Fun 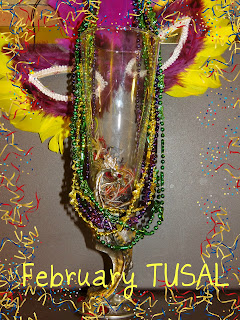 It might not look like much, but I'm proud of it!  It's been slow going on the baby piece, I'm sort of stuck on the red long johns!  No new pics since there wasn't much progress. 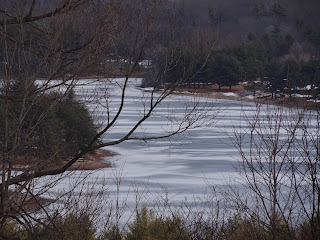 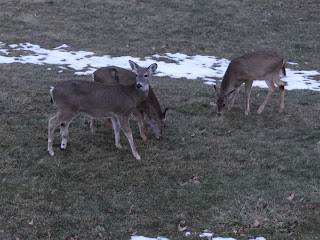 As for my IHSW, we were once again at the lake.  Some of the lake was frozen and most of the snow was gone, but it was still pretty.
I didn't stitch as much as I could have, but did have a very relaxing time.
I worked on a belated pressie for someone special, so I can't show it here!  Just a little something, but I should have reversed the pattern and didn't realize it until it was almost done.  Oh well, now I have an extra one and don't have much more to go on the reversed one.
In other news, we had a King Cake for Mardi Gras yesterday and Nathan thought that because there was a baby in it, that I should have one!   When I told him he'd have to share his room and if it was a girl, it would also have to be a princess room, he was not impressed and quickly changed his mind!
Scribbled by Astrids dragon at 14:20 4 comments:
Email ThisBlogThis!Share to TwitterShare to FacebookShare to Pinterest
Labels: IHSW, Scenes, TUSAL

Happy Hearts to You! 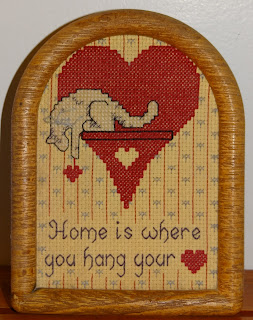 I meant to post this yesterday, but just didn't get to it - too much loving going on!  I hope you all had a day filled with love and kindness. 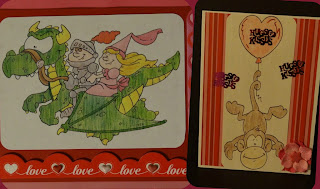 We don't really "do" Valentine's Day per se - cards and a little bit of candy, Paul's favourite dinner (meatloaf!), and some goodies for the boys. 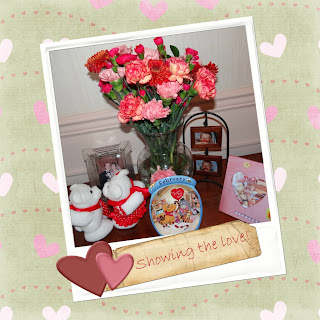 As lovely as roses are, I love carnations - they last such a long time.  I was lucky enough to receive FOUR bunches! 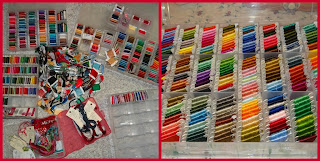 So I joined the bandwagon and bought a Creative Options bobbin box.  I was able to put all three of my DMC boxes into one, yeah!  I'm pretty sure I have all of the DMC colours, but I might be missing one or two along the way.
The only "problem" I had with the box, is that the cardboard bobbins don't fit the way they should - it's not quite wide enough.  I tried to turn it over, but then they were too tall and the lid wouldn't shut properly.  I also tried to trim the bobbin, but that wasn't right either.  End result - I put them in crooked and still have plenty of room for more!
Saving the best for last... we had another stitching date on Sunday, but only Denise and DJ were able to come.  The time just flew by, as it always does when we get together.  Looking forward to meeting next month, for the weekend this time! 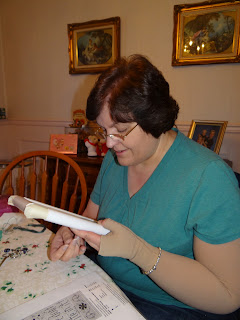 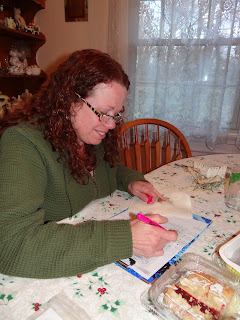 Scribbled by Astrids dragon at 23:42 5 comments:
Email ThisBlogThis!Share to TwitterShare to FacebookShare to Pinterest
Labels: Friends

Scribbled by Astrids dragon at 22:12 No comments:
Email ThisBlogThis!Share to TwitterShare to FacebookShare to Pinterest
Labels: PIF 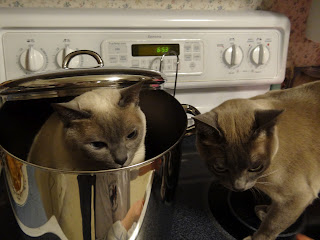 What's cooking?  Certainly not the cats and my stitching has been on the slow cooker!  I did have a stitching date with DJ today (yeah!), so I got some done...

Looking forward to another stitching gals date on Sunday, I could really get used to this! 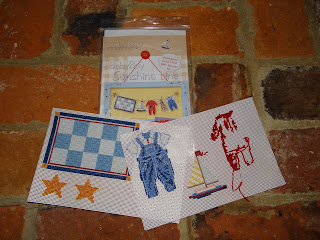 I'm still working on the baby piece, it's slow going.  I'm not sure I'm going to make the same thing for my other grandnephew, once might be enough!


I messed up on One Nation and haven't got around to frogging it yet, so no progress on that one.  After sorting through my stash, I "found" a wedding sampler I started almost 20 years ago.  The sad part - it only needs a small amount of backstitching, the names and date, and then framing.  I guess I"ll tell her I wanted to make sure the marriage would last!  So next month I hope to have that finished and who knows what else I may find. 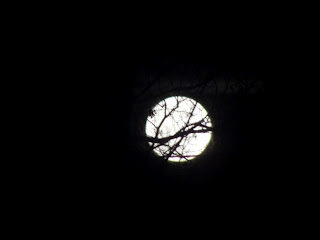 Oh No, another addiction!

Need I say more?  I'm know some of you know what I'm talking about!  I tried to avoid it, but thought, what's the harm in looking... well, I sure haven't been stitching. 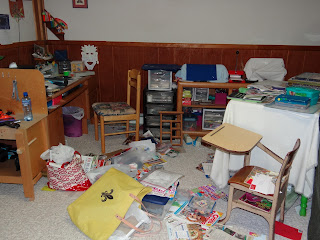 I have been cleaning up my craft area - what a disaster!  And what am I doing today?  Meeting my stitching gals for lunch and then hitting the superbowl sale at our LNS!  Not that I need anything, but you never know. 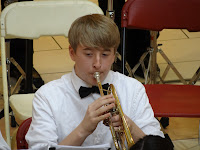 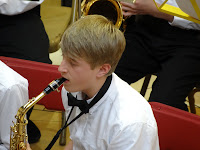 Yesterday, the gmen played at a nearby mall for Catholic schools week.  Nathan was happy to hear Spongebob and Spiderman! 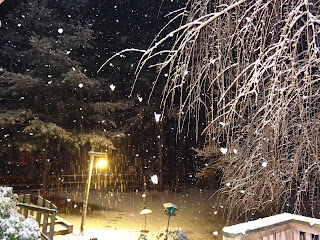 We did have a little bit of snow last night, but only enough to make it look pretty.  But I'll take it, especially since last week it felt like spring - darn weather!

I'm not sure what's up with this site, but this post hasn't been showing up on Google Reader.  So here's an update - had lunch with Danielle, Denise, DJ and Jill at Peace of Pizza and then hit the sale at The Stitching Post.  I think we all left happy and with more projects to work on, like we needed more?!  We have a stitching date next weekend (I could so get used to this), and a weekend getaway to try and work out!
Scribbled by Astrids dragon at 11:09 4 comments:
Email ThisBlogThis!Share to TwitterShare to FacebookShare to Pinterest
Labels: Family, Scenes
Newer Posts Older Posts Home
Subscribe to: Posts (Atom)
Translate