It was Nathan's weekend! 💩⚜

This past weekend was jam packed full of activity.
Nathan particiated in the First Lego League Championship and their 💩SLUDGE BUDDY💩 team won 3rd for the Programming Award. All the boys worked hard - in between the Tomfoolery during our meetings!
They also had two great coaches. I was one too, but more in the background and helping the boys putting together the boards. 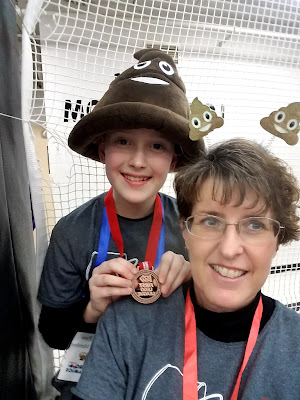 The "arena" area - photo taken by their technology teacher. 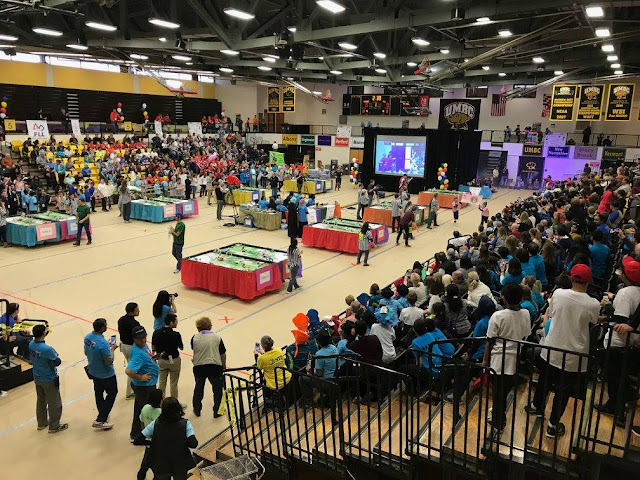 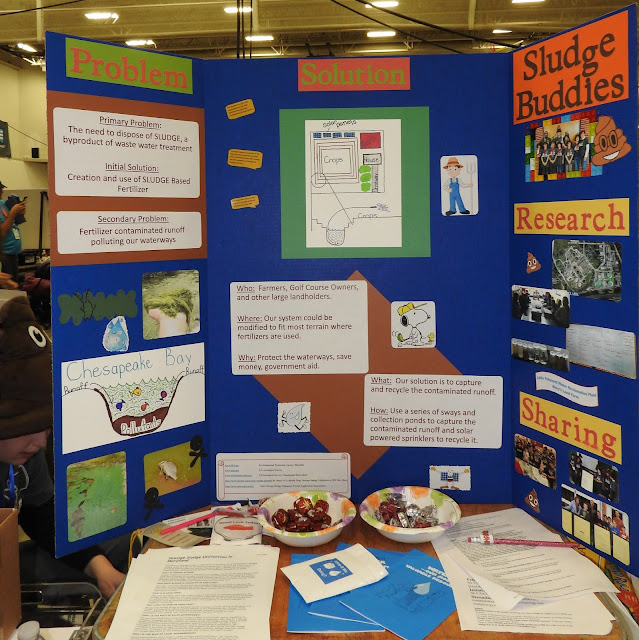 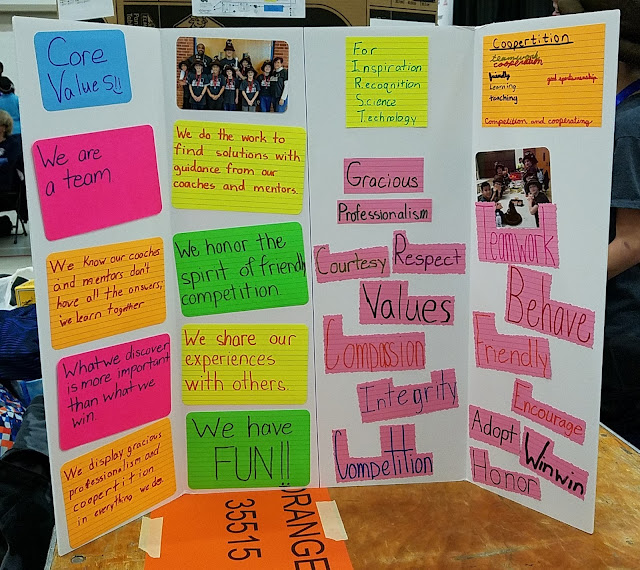 Nathan and JP getting ready to start 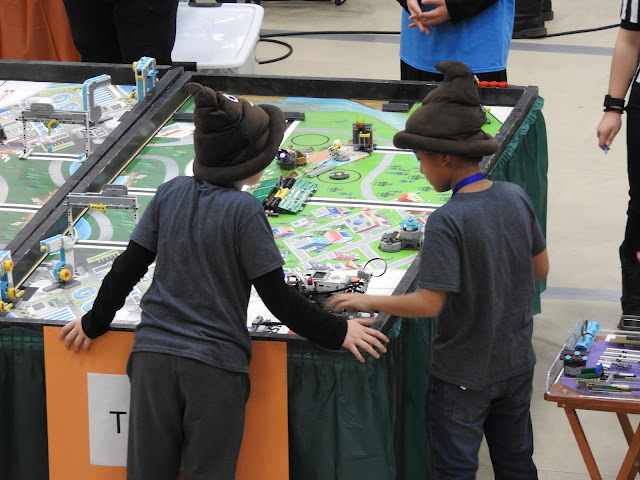 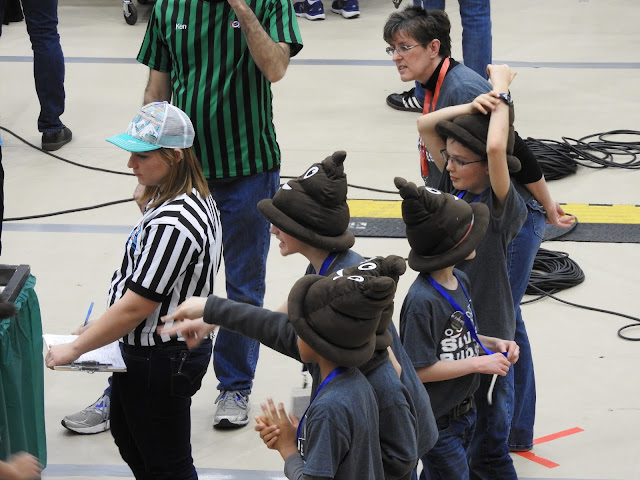 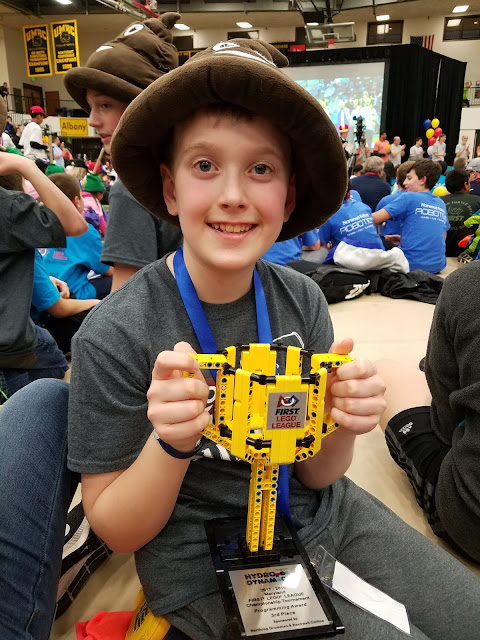 The Gmen came to support their little brother, pretty easy since it was at UMBC and Gman2 had spent the night on Friday! 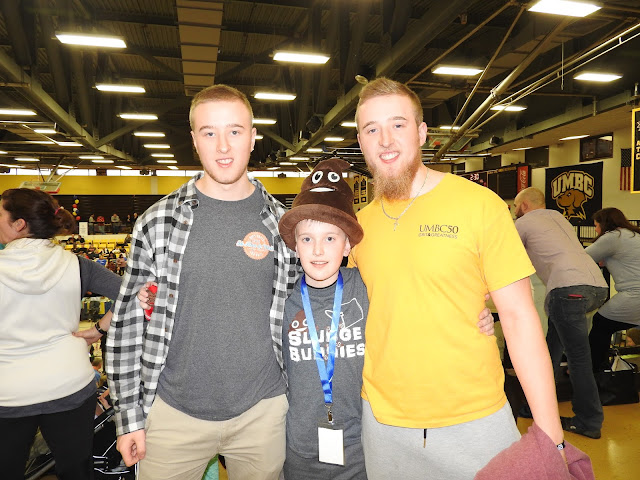 Then it was Scout time.
His "Old Goat" den did a skit with the parents acting as their arms, but they didn't know they were going to be in the front until we set it up... fun! 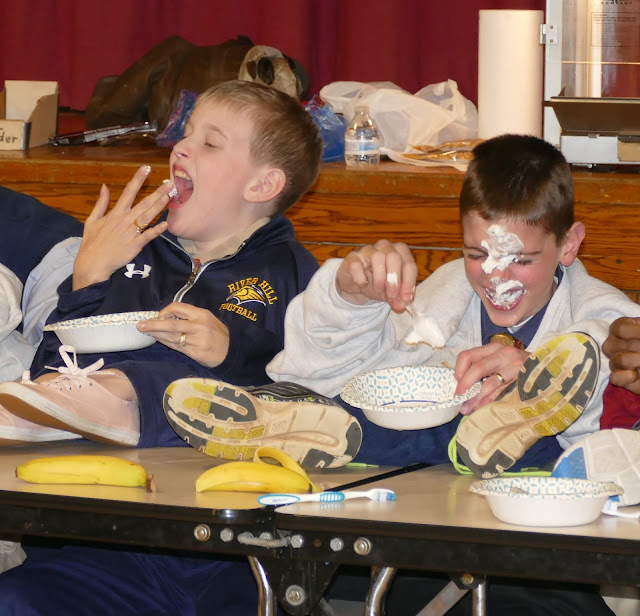 Awe, from a Tiger Scout to Arrow of Light. 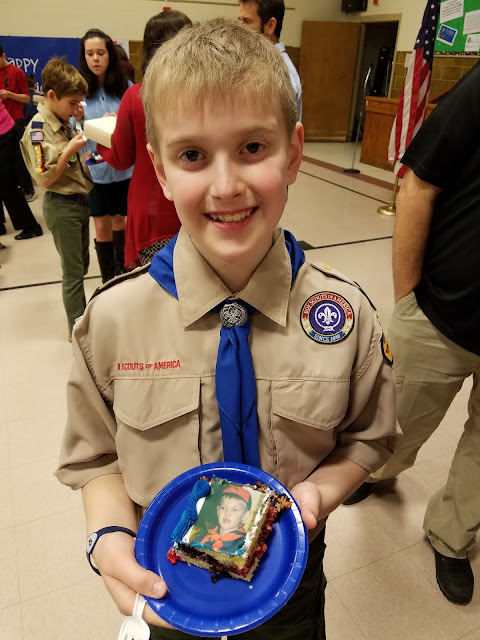 For all their hard work as den leaders, the den gave them a gift card and I stitched this up and made a card for them. 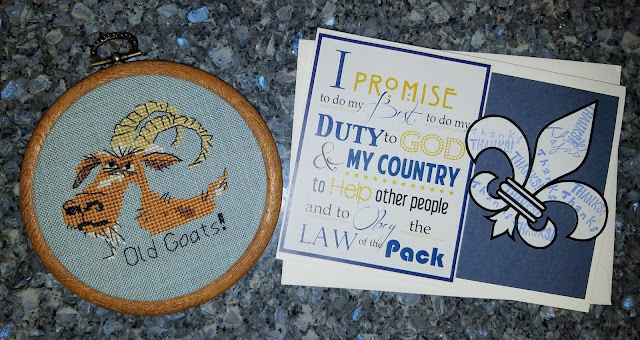 Finally, quiet time for stitching with my new favourite tshirt!
In that order works for me. 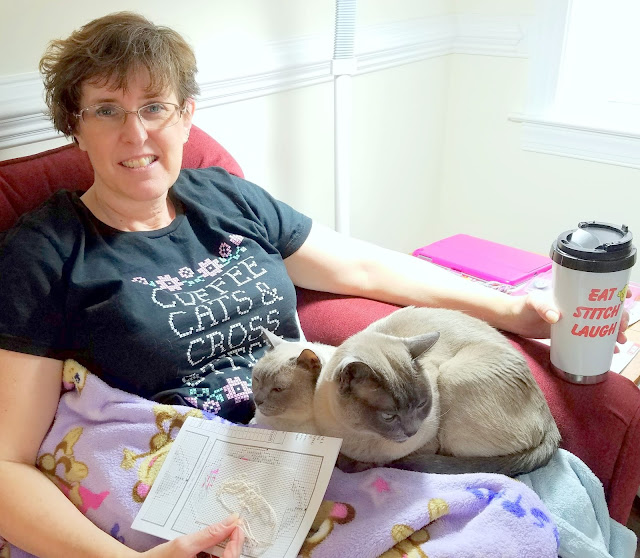 Since I wasn't able to participate last month, here I am just a little late for February.

Friday afternoon I picked up my nieces so we could celebrate Christmas and their birthdays. Just a little belated, but that's how we roll. 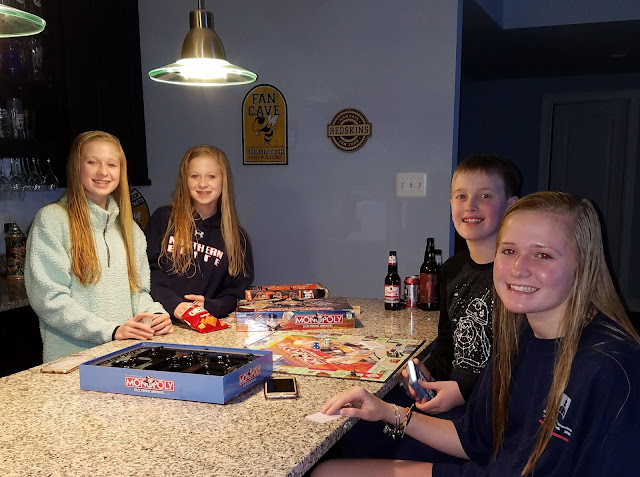 Saturday morning I took the girls to have their nails done as their Christmas present, all three wanted gel - not spoiled much! I told them next year we're all getting henna tattoos!
The afternoon brought snow, such a pretty view from my craft room. 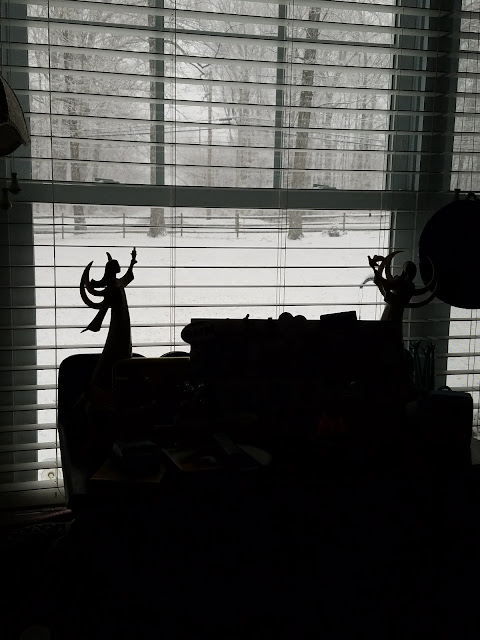 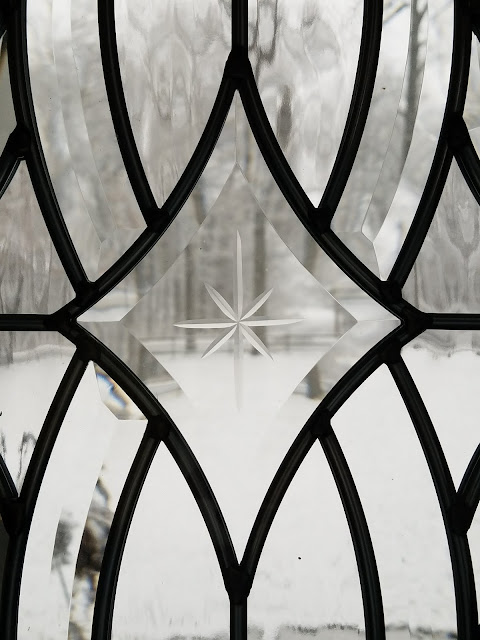 Sunday evening we dressed up and went to the Melting Pot for fondue to celebrate their 14th birthdays. 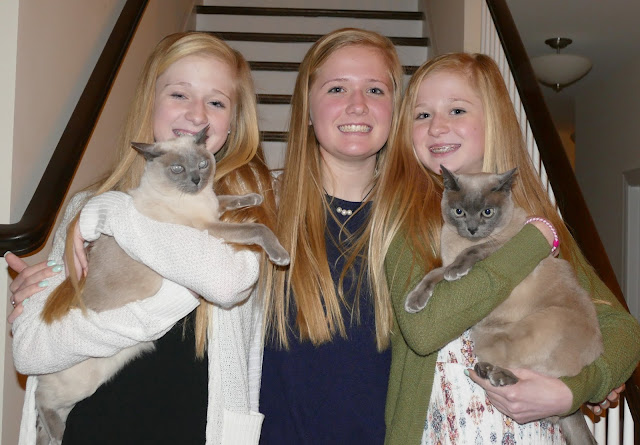 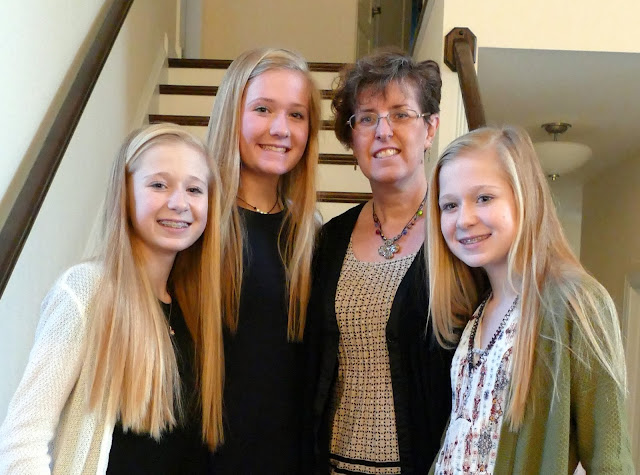 They wanted a goofy picture, they got it! 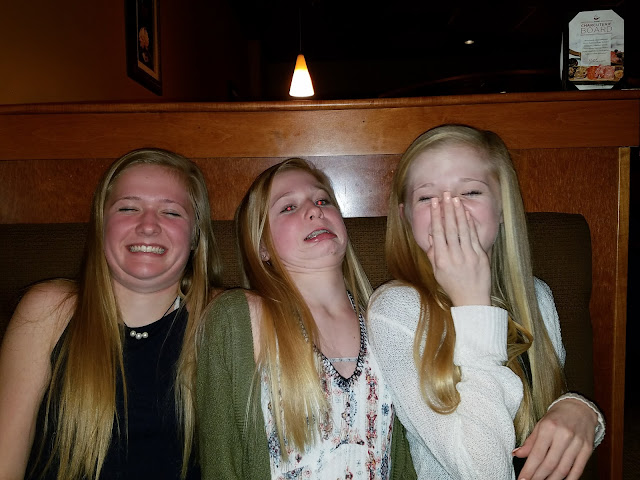 So even though this weekend was busy, I was able to take some time to stitch and almost finish my Welsh Dragon. I was making it for myself, but I think I'll give it to my Dad for St. David's Day instead. I do want to make myself a smaller one though. 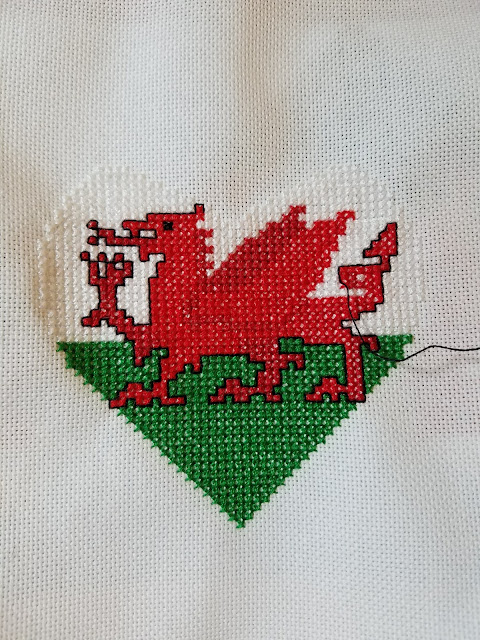 Hopefully I'll be on time for next month.
Scribbled by Astrids dragon at 23:22 8 comments:
Email ThisBlogThis!Share to TwitterShare to FacebookShare to Pinterest
Labels: Family, IHSW

Welcome to another fun loving year of the Secret Stitching Sweetheart Blog Hop, brought to you by Sweetheart Jo!
Hop on over to her blog to follow the love and try to figure out who sent what.


Such sweet stitching, all three perfect for Valentine's Day! Who made this lovely trio? 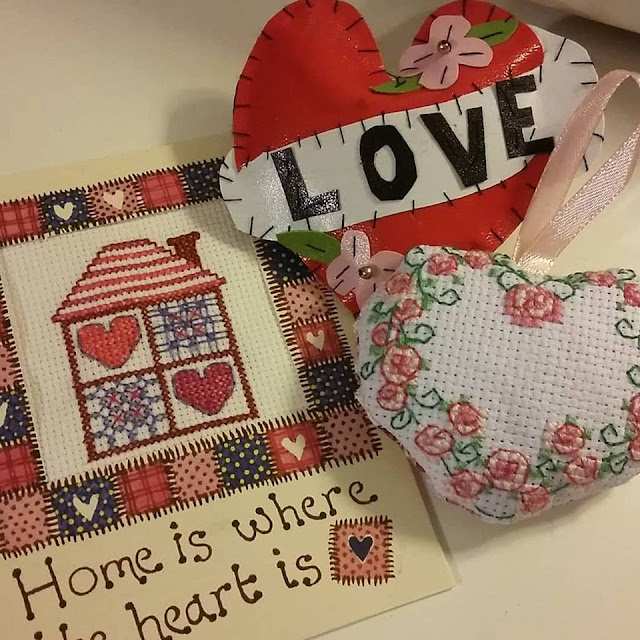 What is Valentine's Day?
According to seven year old Aki...
"It's like where it's basically you give people cards, and it's 'be nice to everybody' day. Like if you see a stranger on the street, you can say, 'Hi.' "

After way too long, I finally finished them! 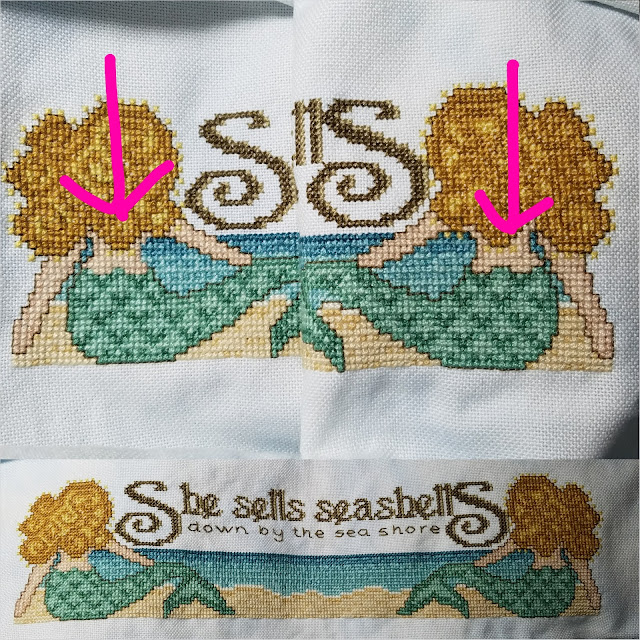 Thoughts? Take it out or add to the other one?
Scribbled by Astrids dragon at 16:14 15 comments:
Email ThisBlogThis!Share to TwitterShare to FacebookShare to Pinterest
Labels: Mermaids
Newer Posts Older Posts Home
Subscribe to: Posts (Atom)
Translate