Hey, it's still July and I finally finished April!  Too bad this was supposed to be finished LAST year.   I decided the bottom and right side vines needed some colour, so I changed the green to purple. 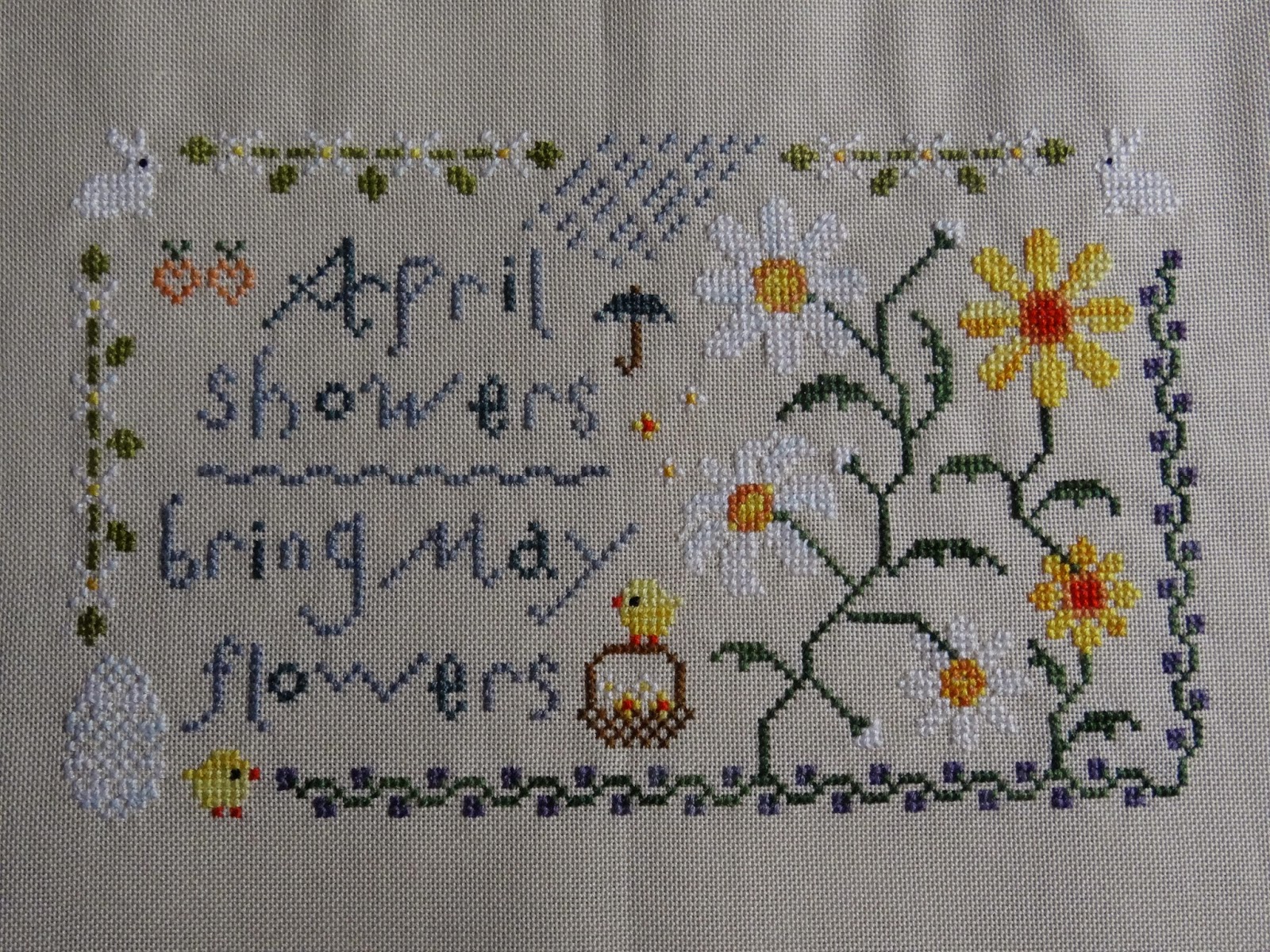 Now I can dig out May and get that started.  I'm trying to use what floss I've got, so I've changed the colours a bit.  I'd like to think I can do them all by the end of the year, but that's just wishful thinking! 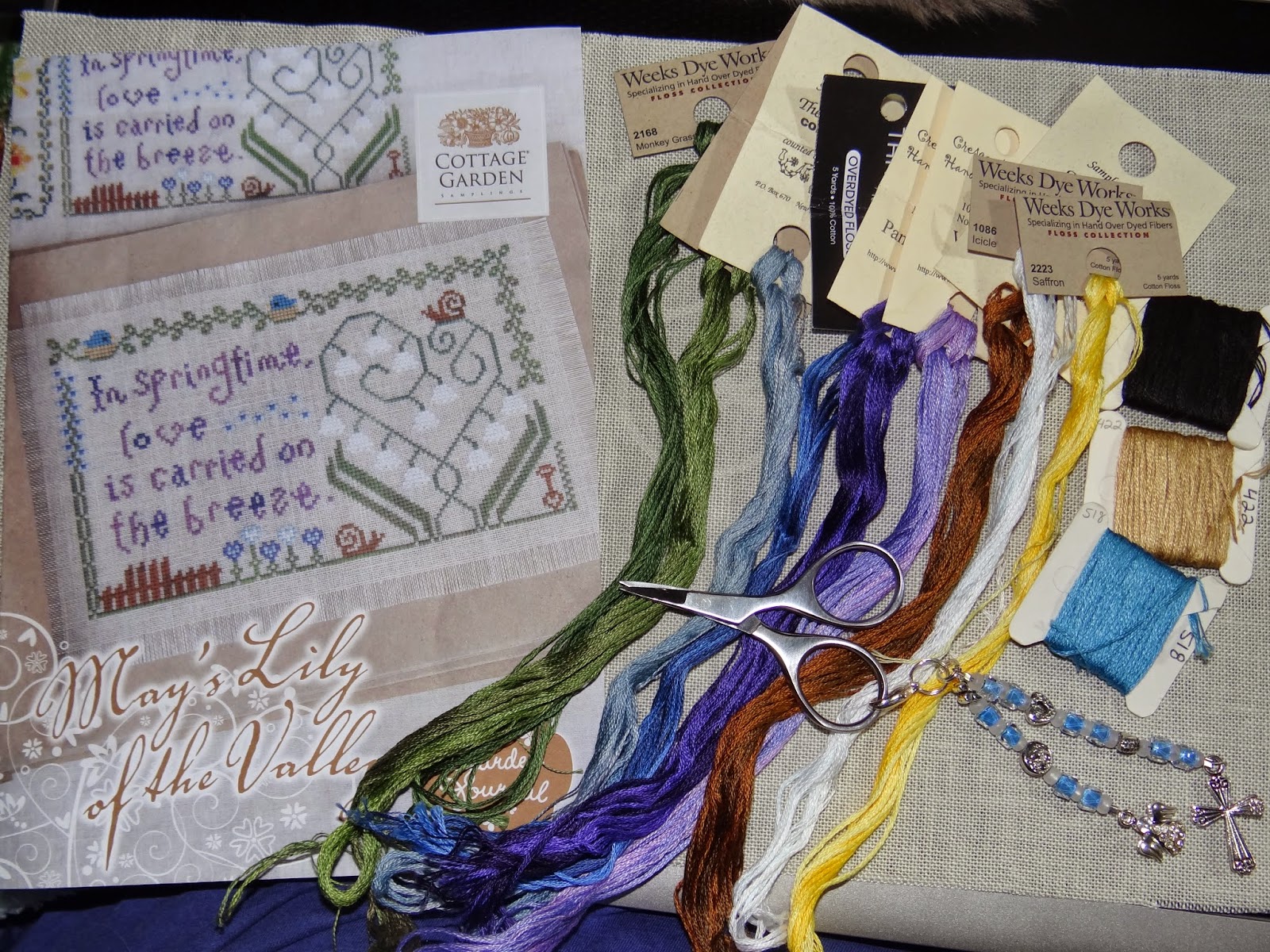 ﻿
The house is coming along beautifully and here I am in my craft room.  This was taken before the drywall was put up. 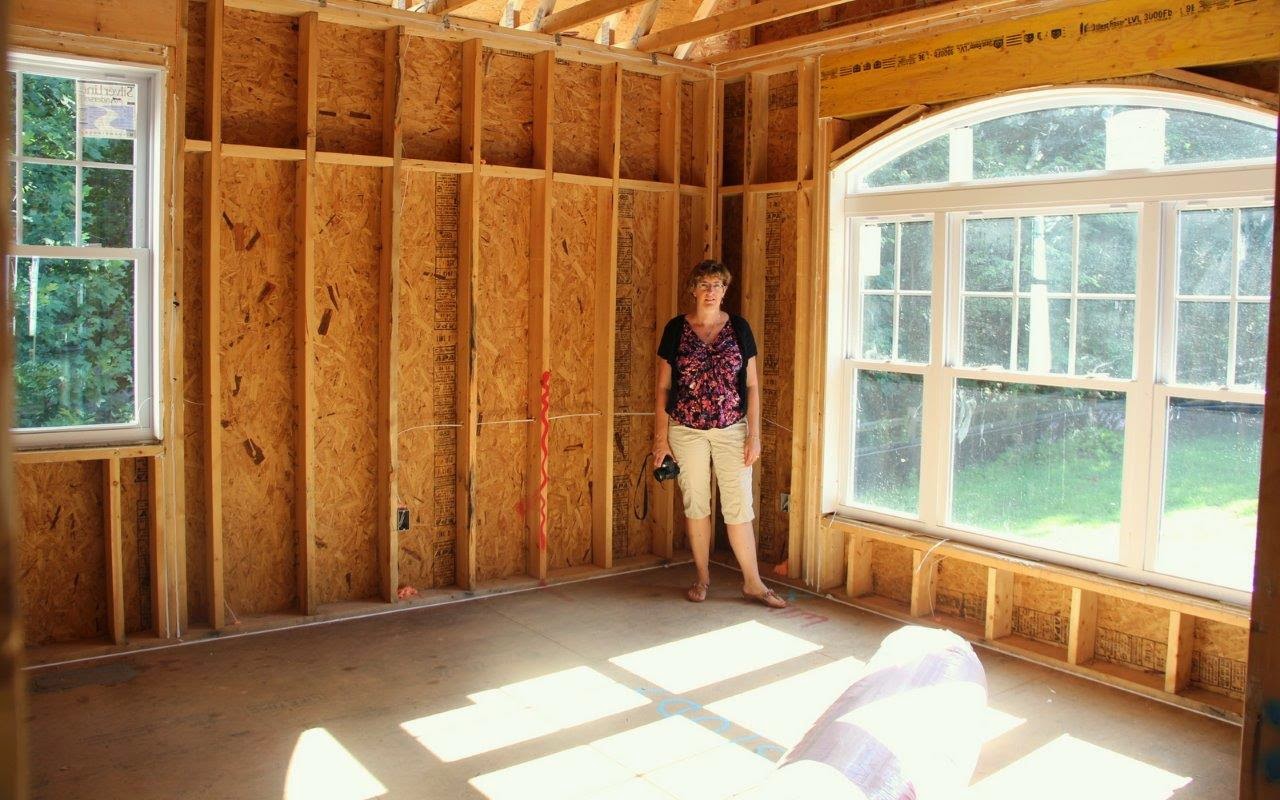 Here is it with walls, I have no idea what colour it should be painted.  Is there a magical shade of something that would make me stitch faster with no frogging?! 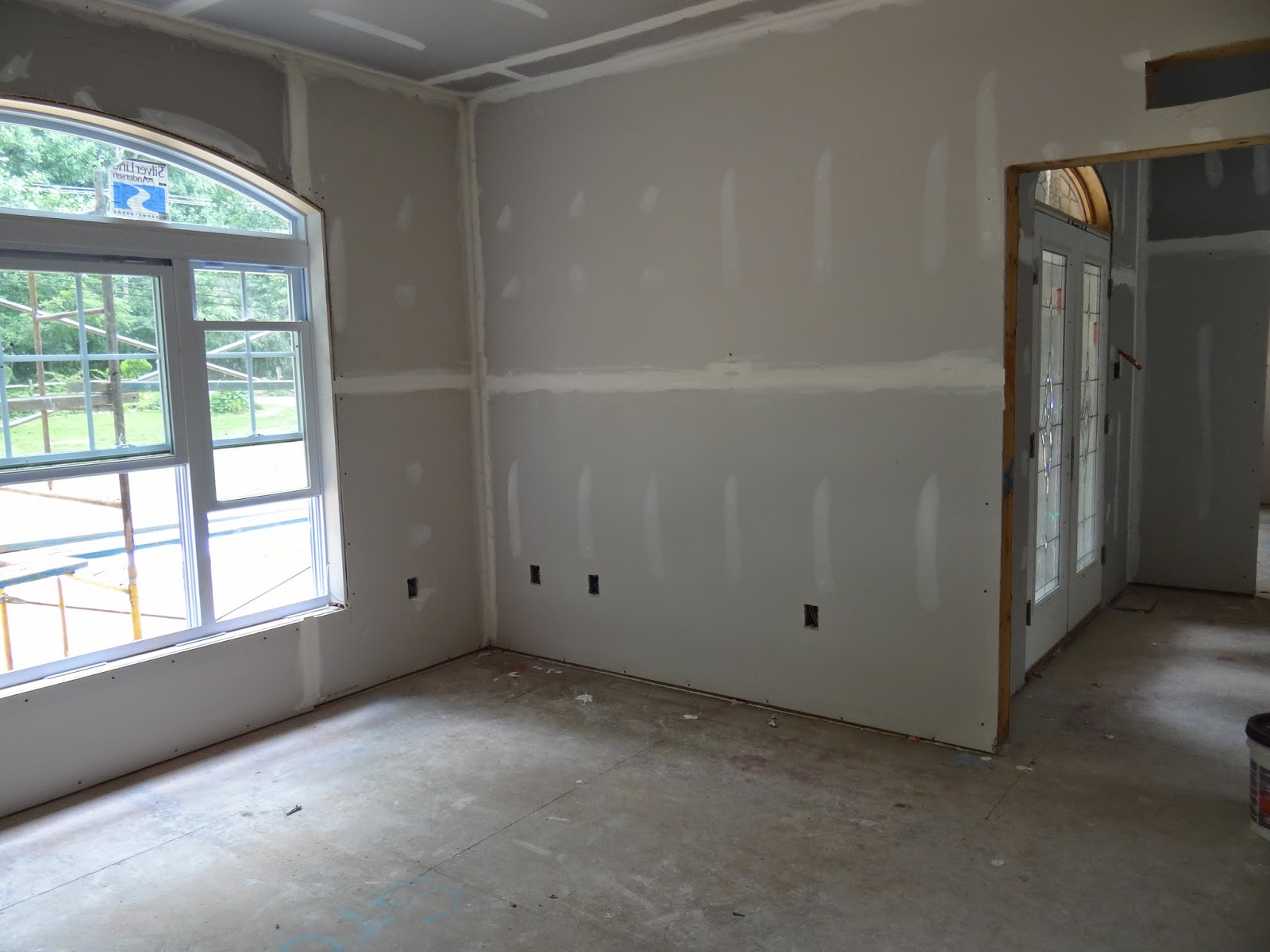 The floors will be a mocha colour wood, but not too dark.  Maybe a light yellow?  Way too many choices, I can't decide... thoughts? 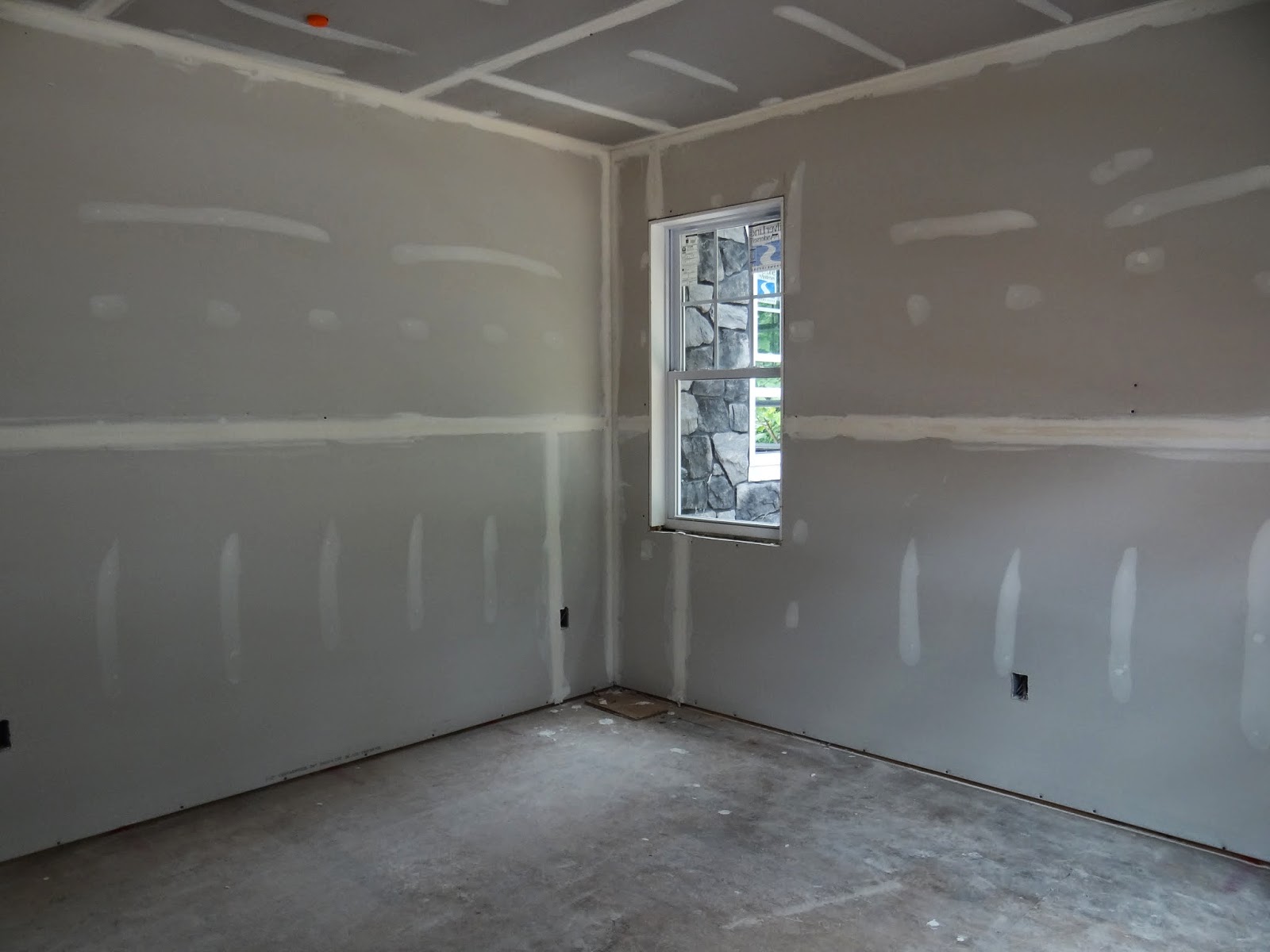 By the way, if you've requested to follow the house progress and haven't heard from me, it might be because it's going to a noreply email if you haven't set it up for your own.
Scribbled by Astrids dragon at 23:59 12 comments:
Email ThisBlogThis!Share to TwitterShare to FacebookShare to Pinterest
Labels: SAL Garden Journal

A conversation with Master Nathan

Nathan spend some time with my parents this week and this is the conversation between my Dad, aka Opa, and 7 1/2 year old Nathan. 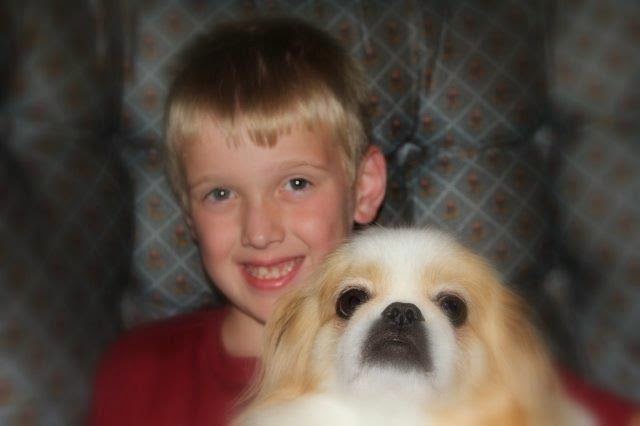 0pa:  Do you think there are fairies?
Nathan:  Well, I sort of guess there are as there is the tooth fairy, and you don't think my parents would take my teeth, do you?
0pa:  Certainly not! What on earth would they do with them?
Nathan:  Exactly....
(Please don't look in Daddy's box on top of his dresser!)

0pa:  How about Jack Frost, Mother Goose and the stork?
Nathan:  No, there isn't a Jack Frost, but we all have mothers so there is a Mother Goose. Everyone knows storks bring babies 'cos they're alive!  I'm still thinking about the Sandman, even though you didn't ask.
0pa:  I heard that when clouds knock into each other they create thunder and lightning.
Nathan:  Nope, it's all electricity.
0pa:  How do you feel about King Neptune and mermaids?
Nathan:  It's a myth...
(No mermaids?  Whose child is this, certainly not mine!)
0pa:  Are there such things as elves and trolls?
Nathan:  Elves, yes, but we don't have trolls in America.
0pa:  How about unicorns?
Nathan:  I don't think so. And before you ask, we know about Santa Claus.
0pa:  We do?
Nathan:  Yes, 0pa, everyone knows there is a Santa Claus.
0pa:  I never doubted for a moment...  For which I received a big understanding smile from Nathan.
0pa:  Could there be witches?
Nathan:  No!
0pa:  Why not?
Nathan:  There just isn't.  I don't believe in them!
0pa:  Do you think there are dragons?
Nathan:  No.... Wait a minute. Yes, there are dragons.
0pa:  Why?
Nathan:  Because the only way the Welsh got their flag was the battle between the two dragons.
(THAT'S my boy!)
0pa:  Angels?
Nathan:  0f course there are angels!
0pa:  Why do you think that?
Nathan:  Because they are God's helpers... For my trouble I received a pitying look as if to say, "doesn't he know anything?"

Scenes from a... boat 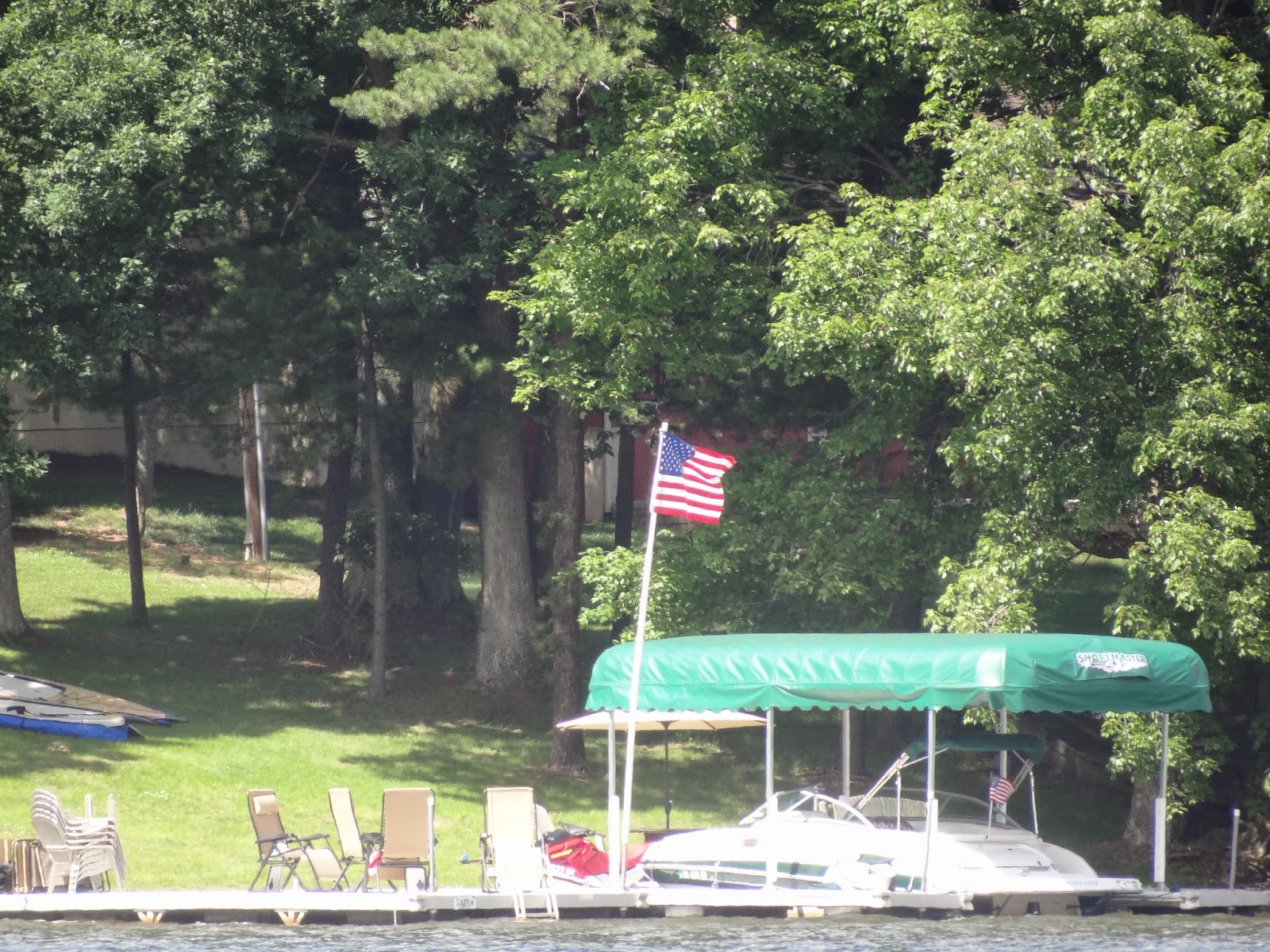 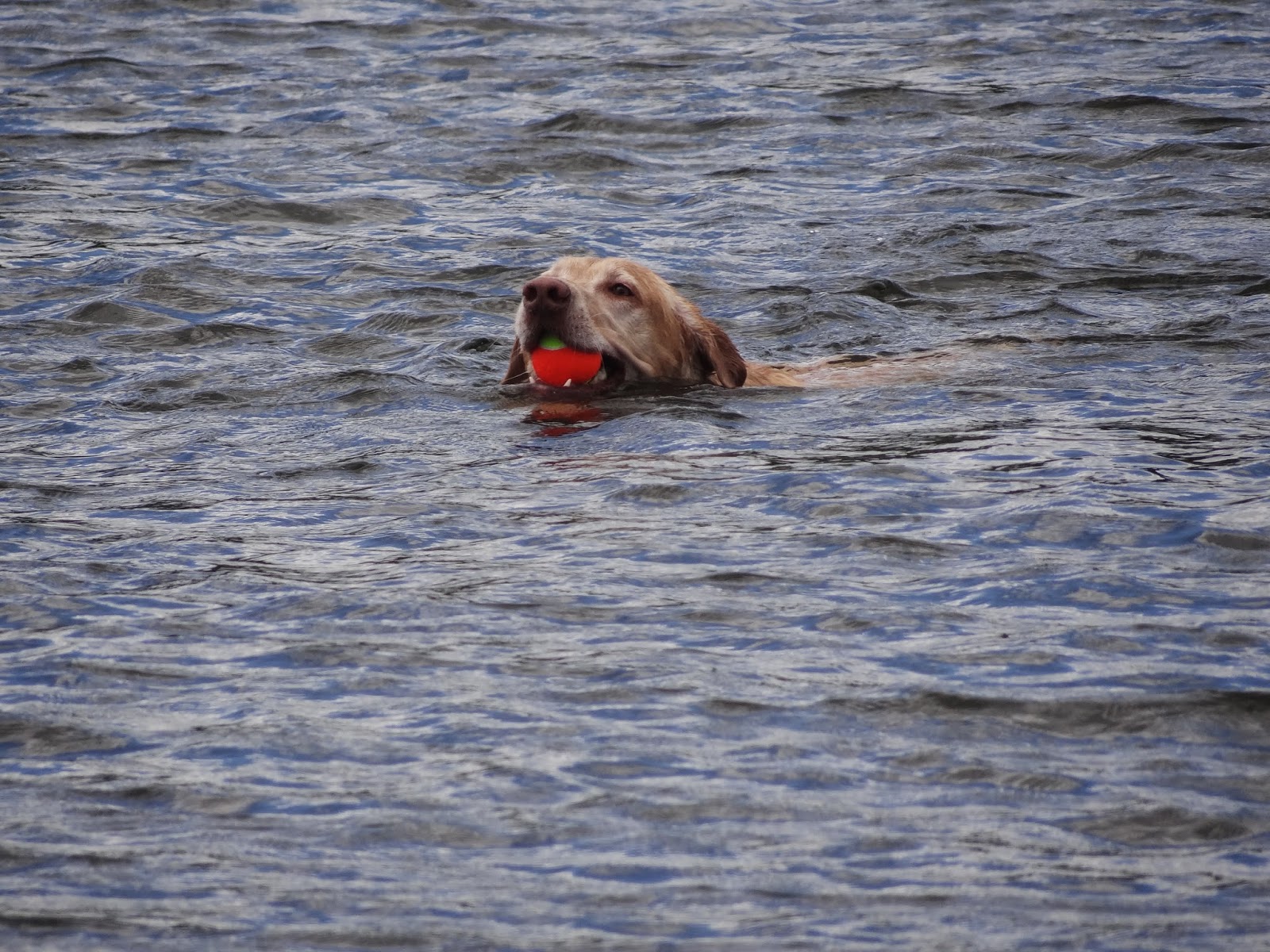 The boat battery died and we were waiting for it to charge up - Nathan's keeping warm under his towel. 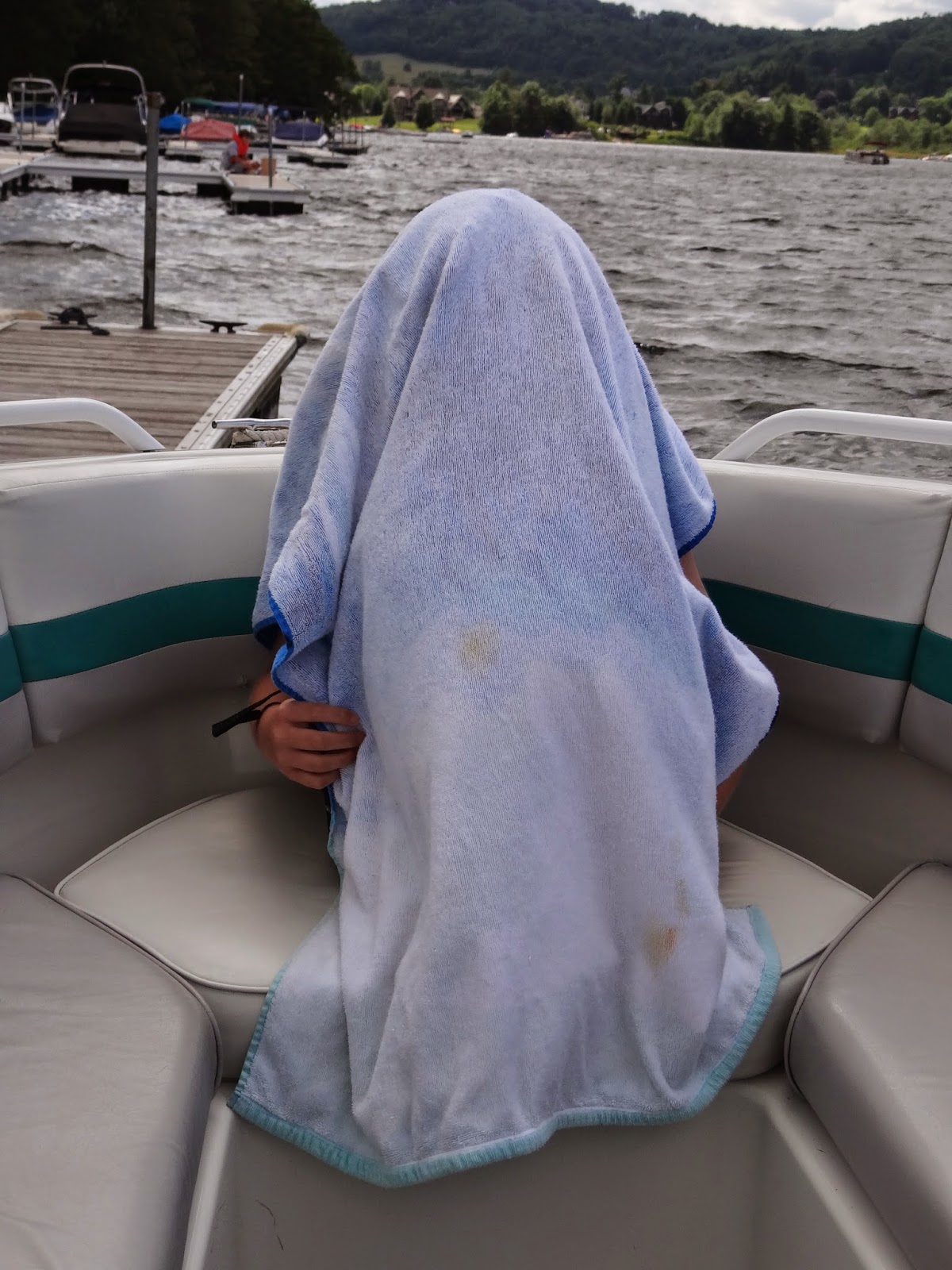 Looks nice, but the water was very choppy. 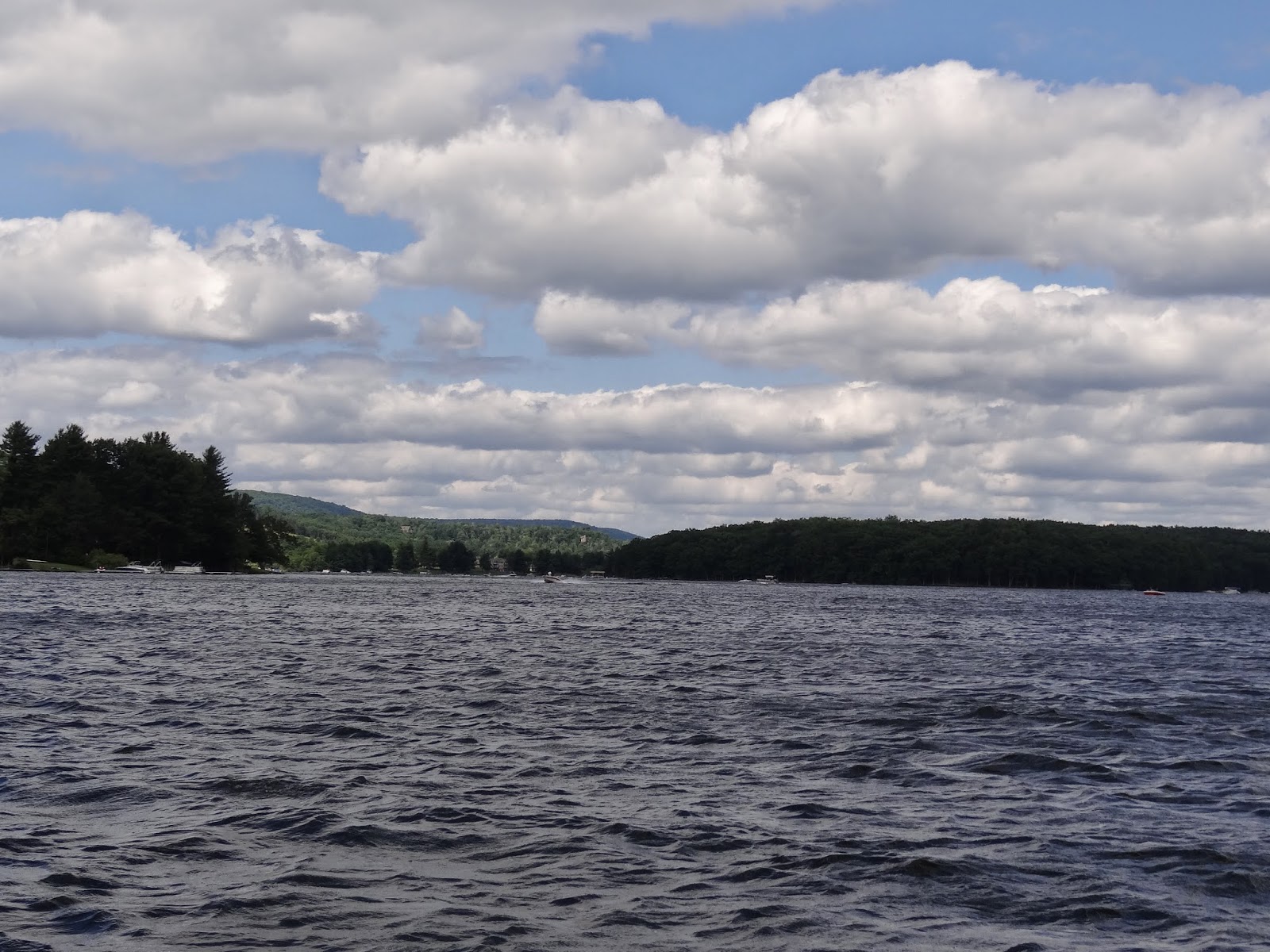 For July 4th, it was cold!  Good thing I had my blanket, it was chilly out there on the water. 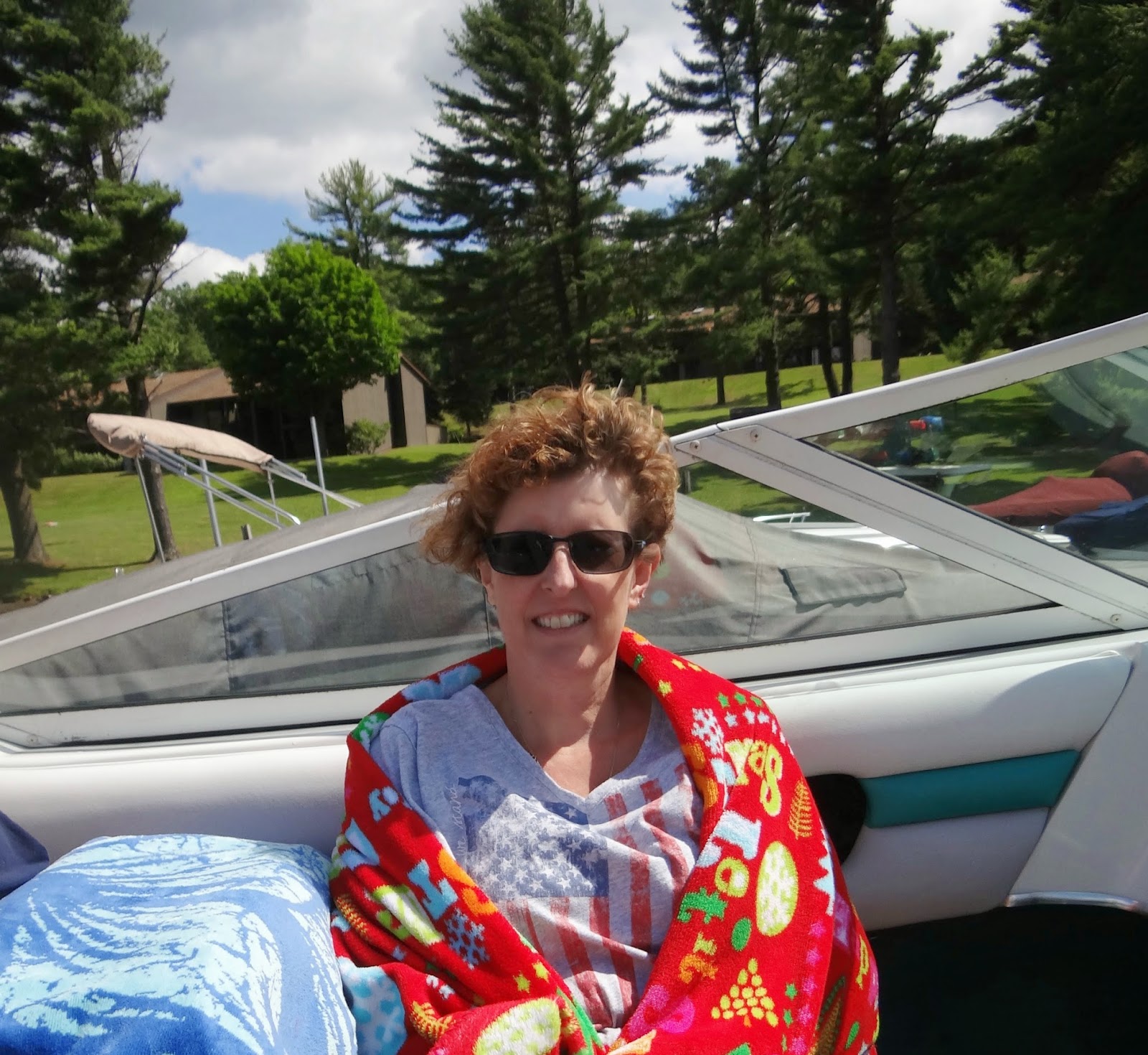 We just need to go straight ahead to the boat slip. 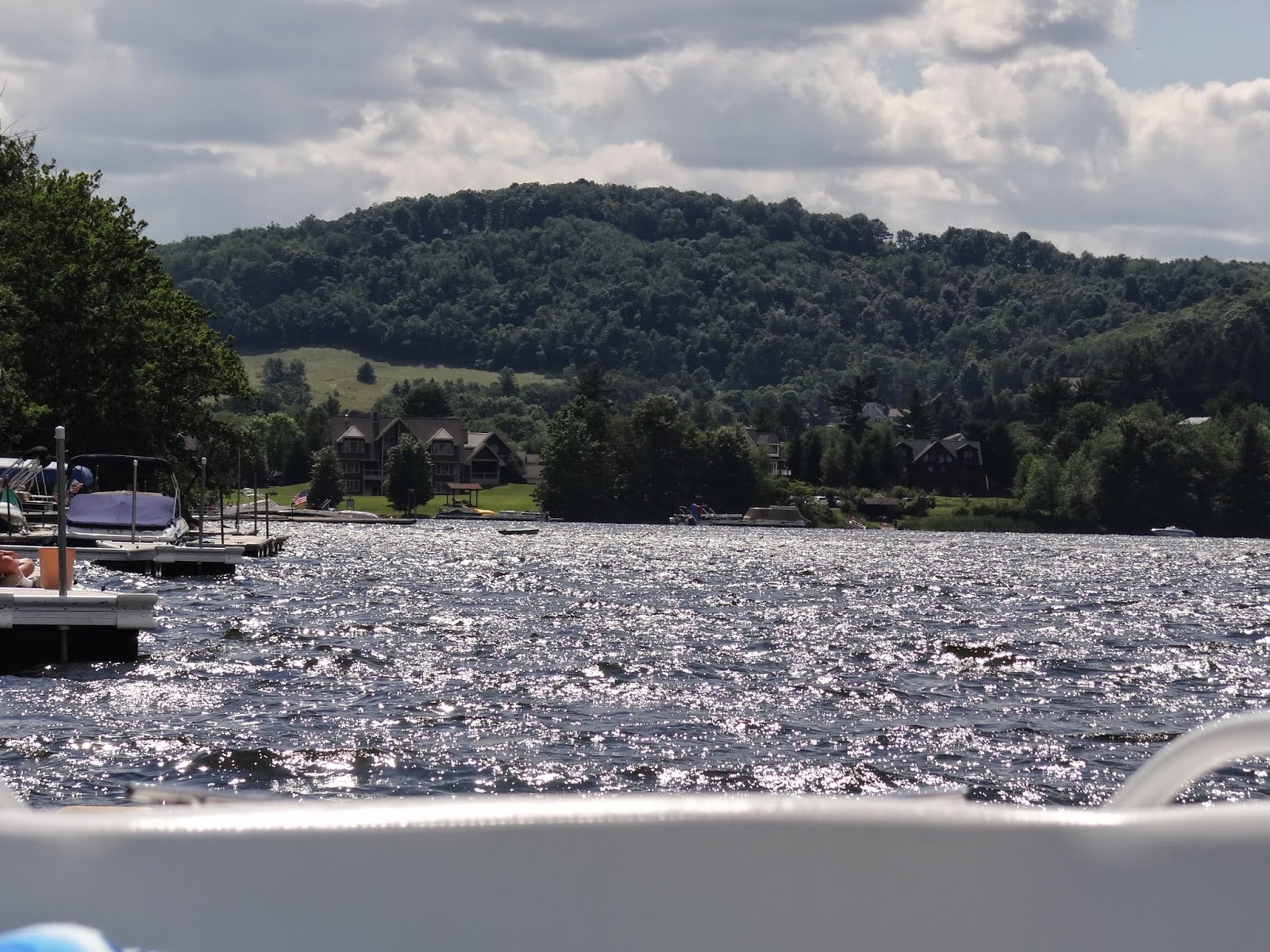 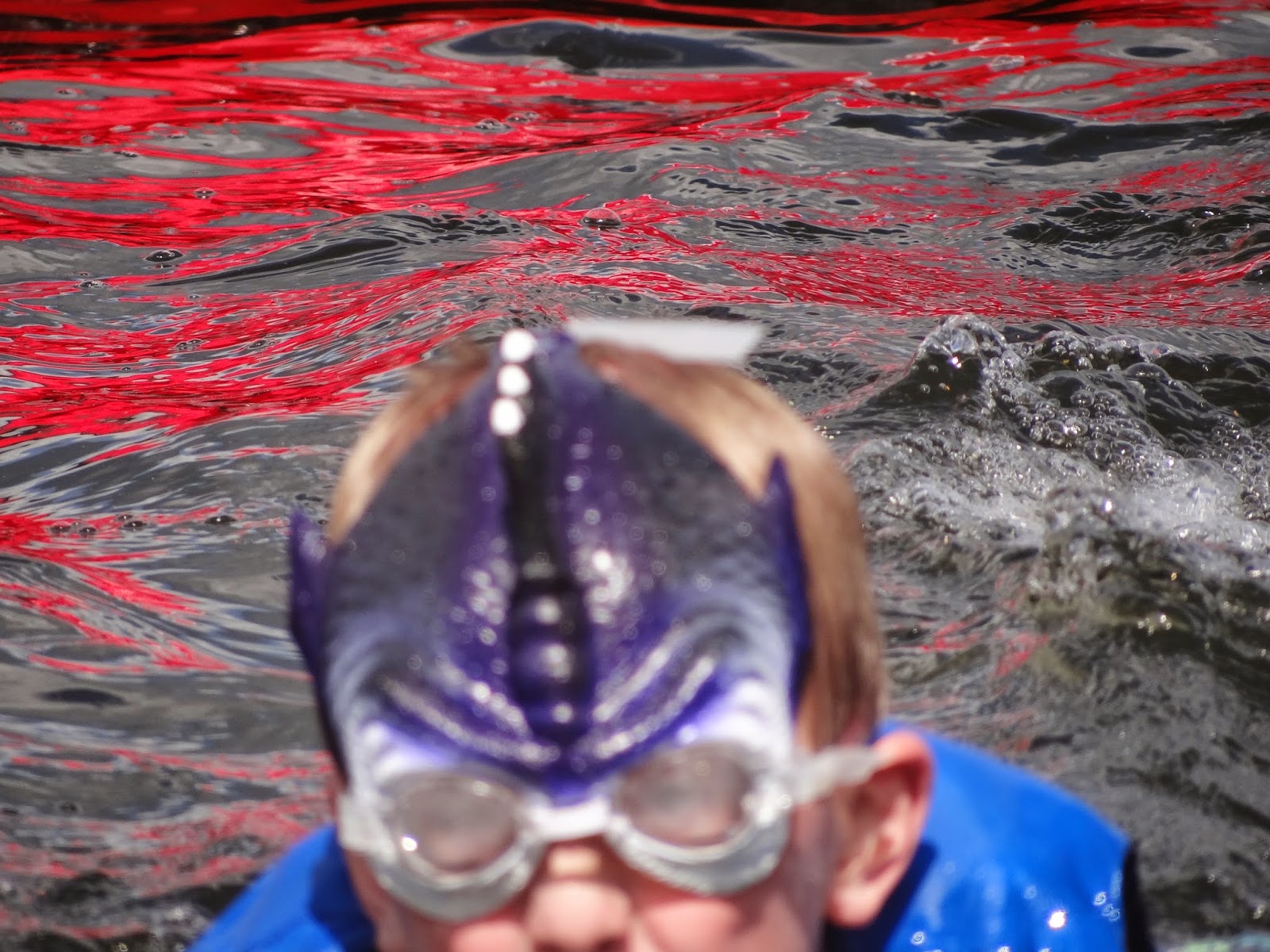 Wasn't too cold for them either. 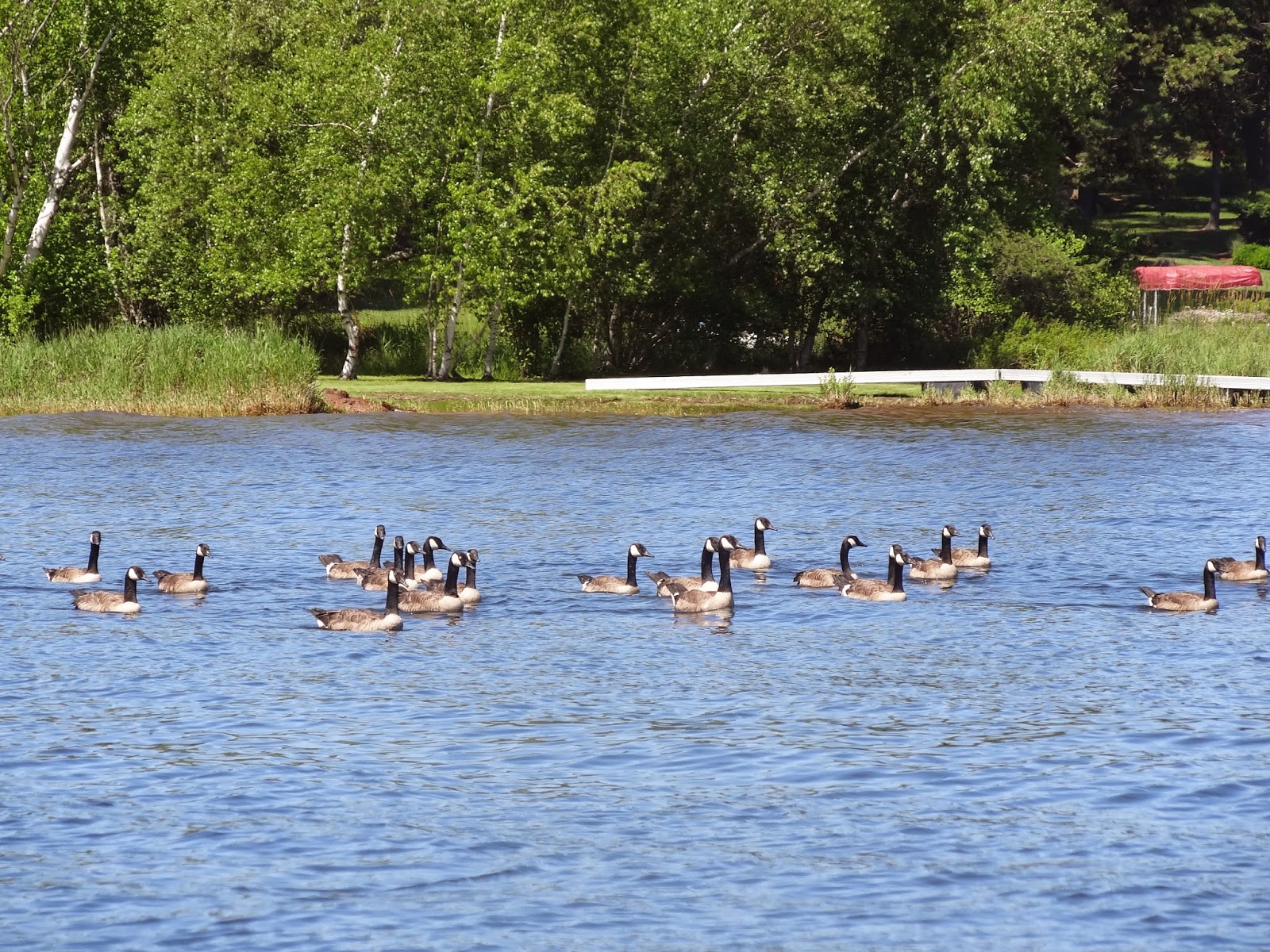 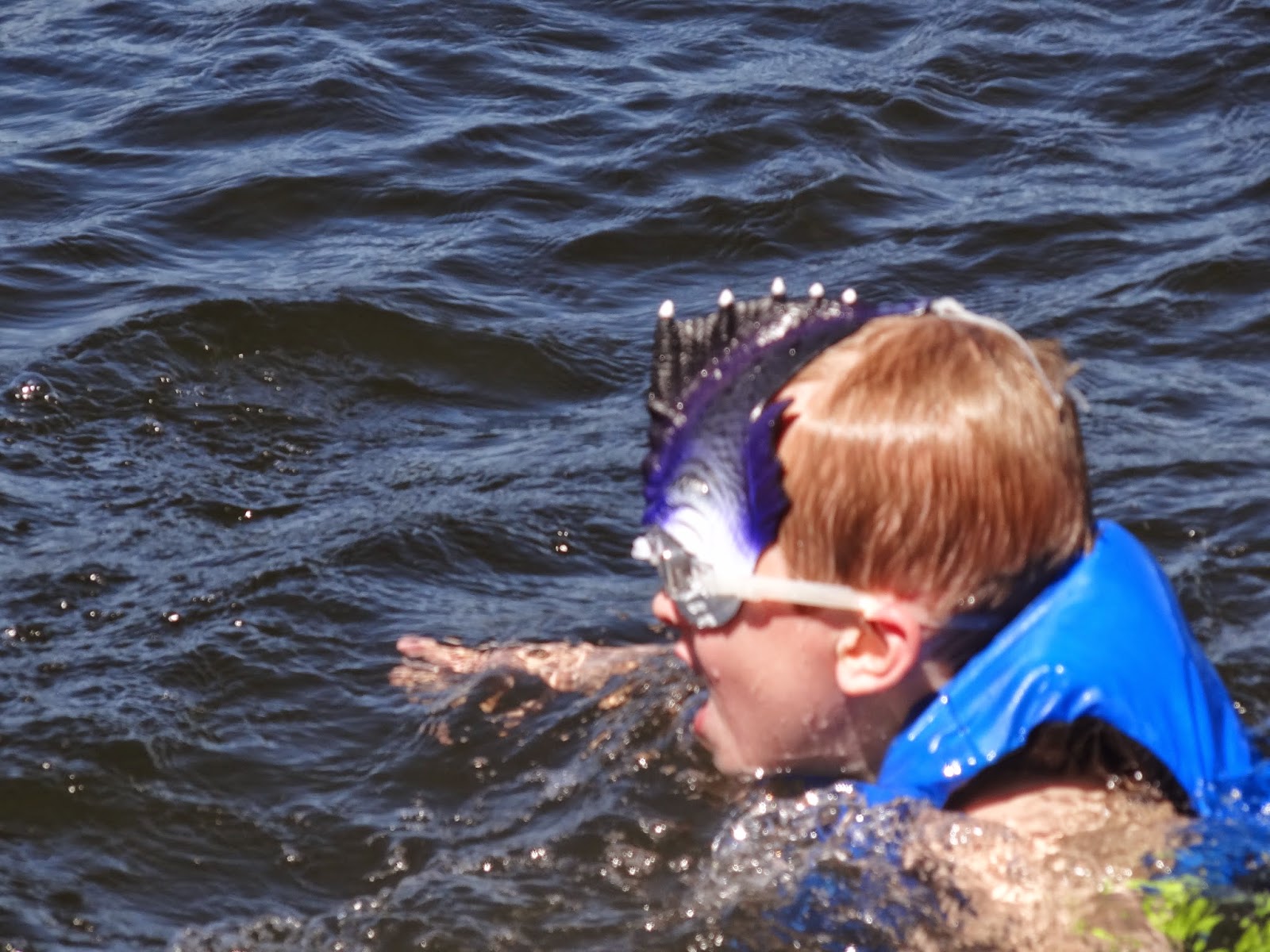 The next day was SO much warmer. 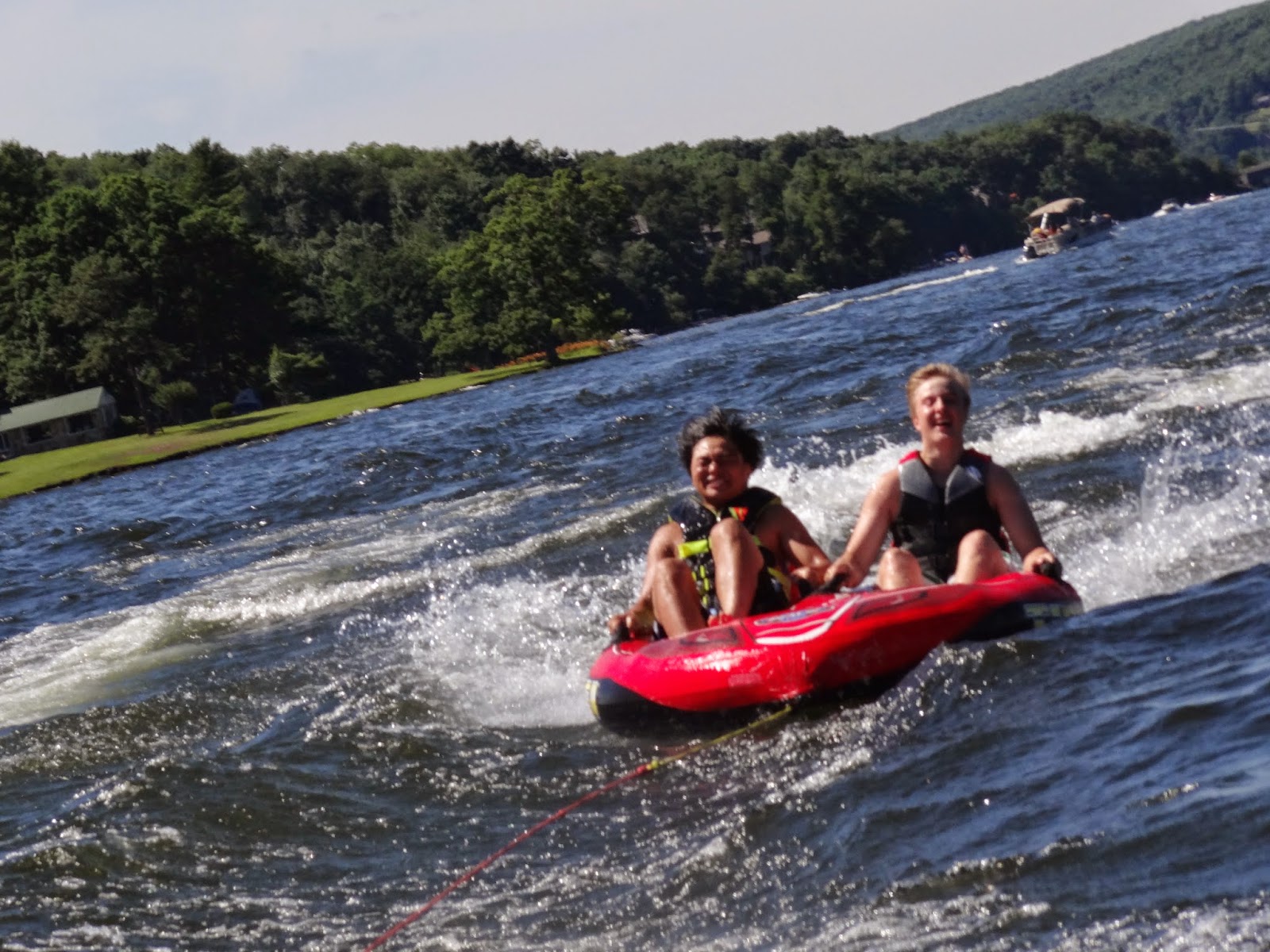 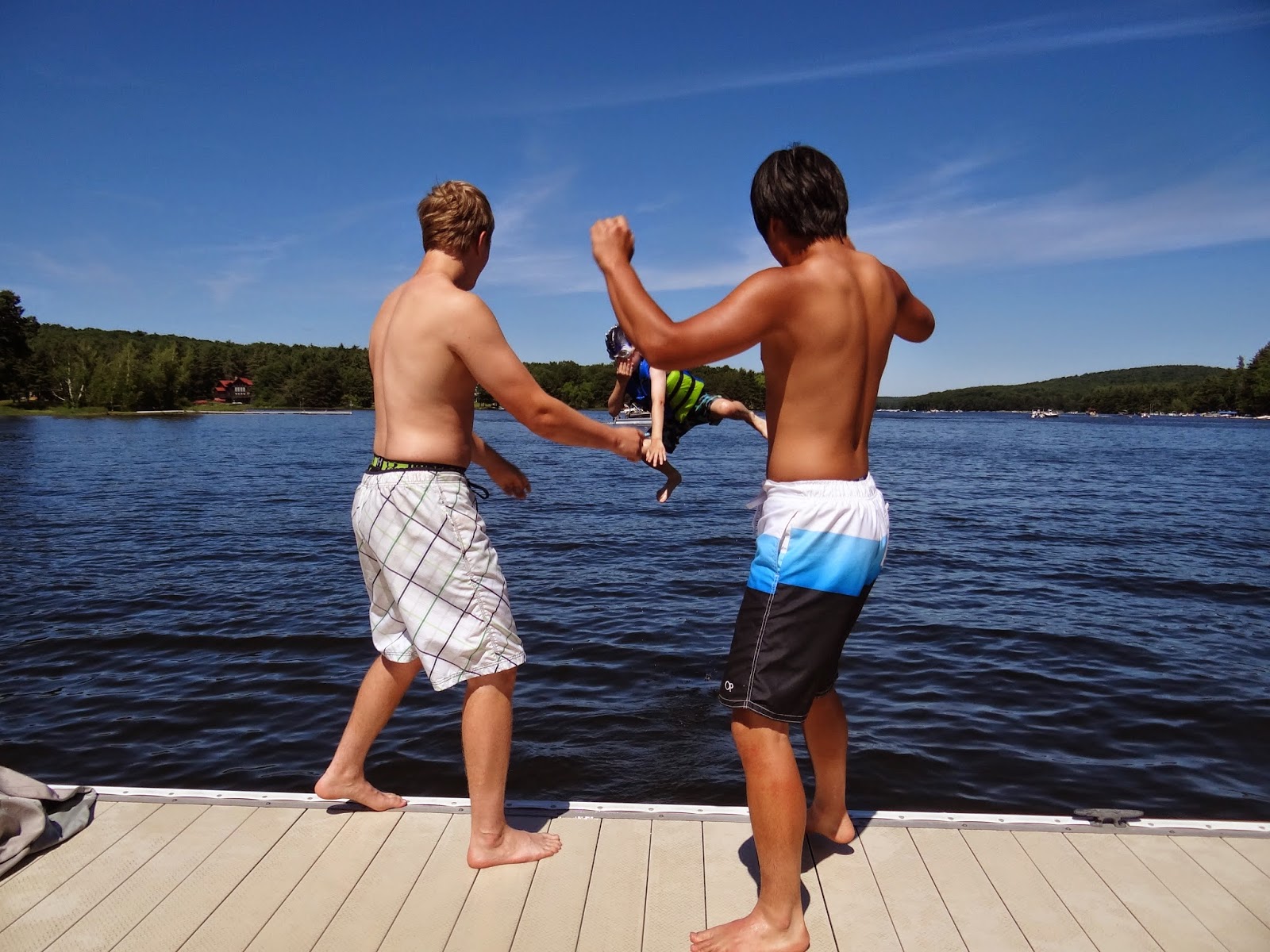 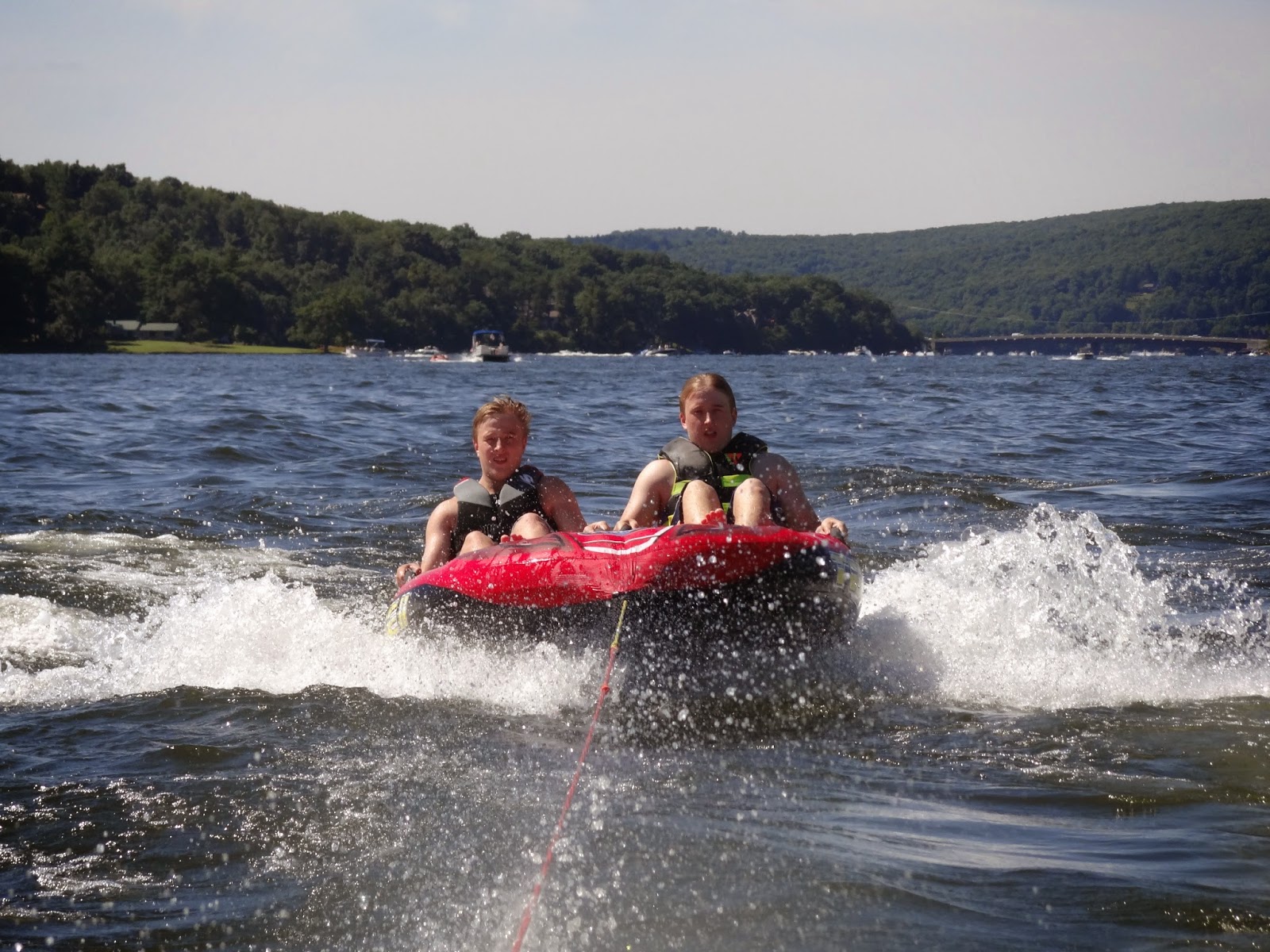 Pretty sure they all had a good time! 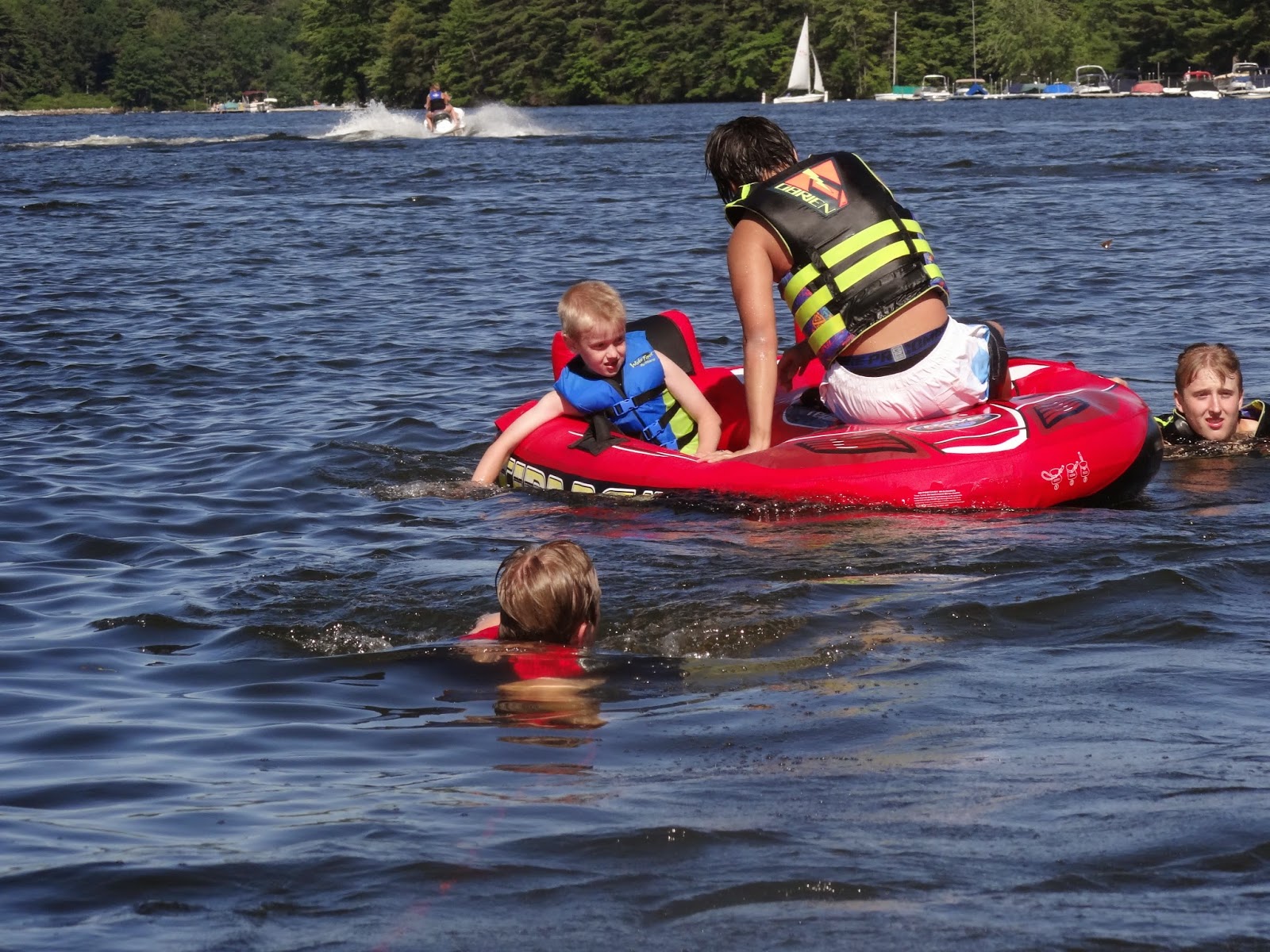 And hey, you can see a corner of the house from the lake.  Darn trees. 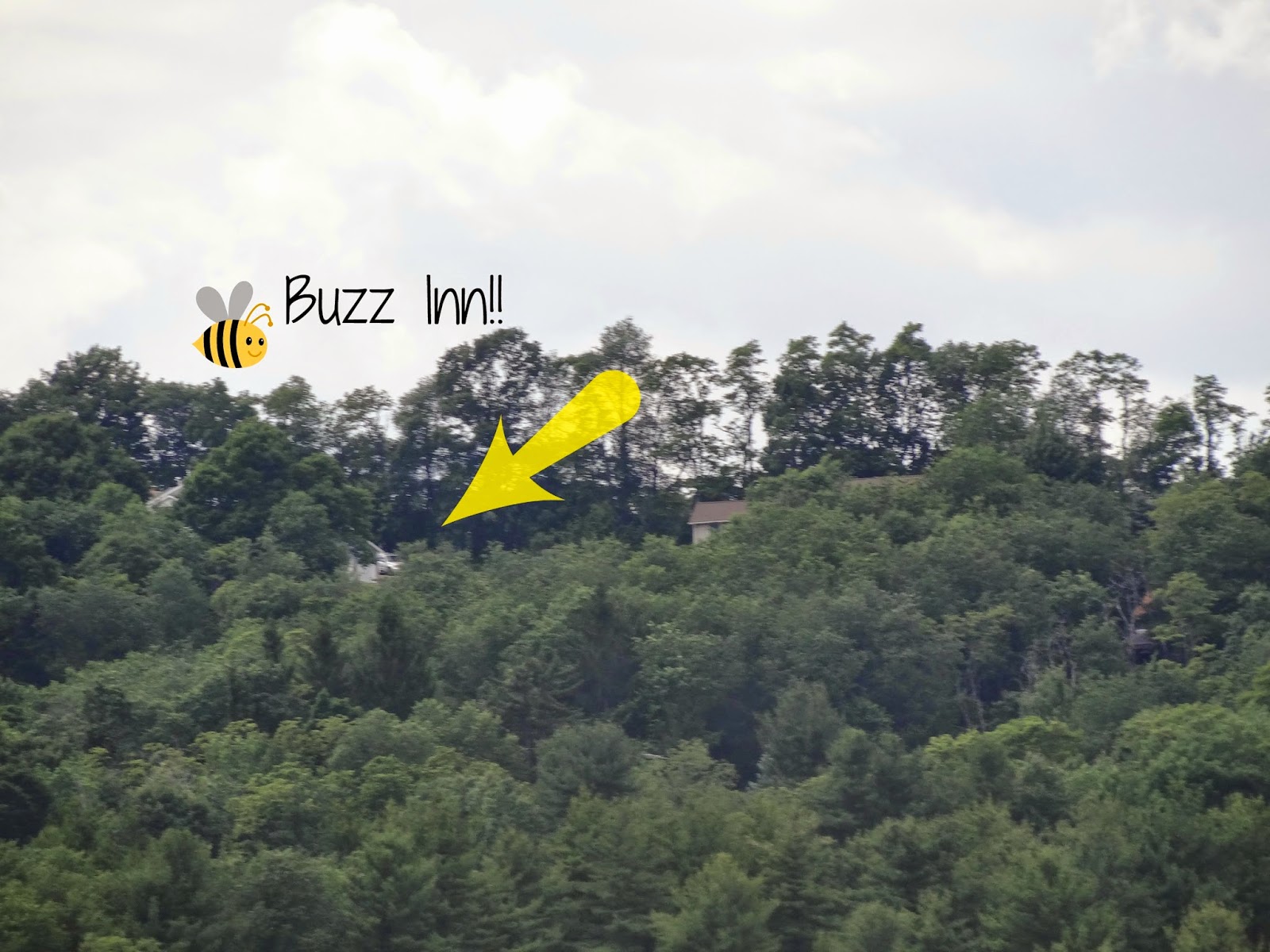