We had a beautiful drive thru Virginia into West Virginia earlier this month on the way to a mini family vacation. 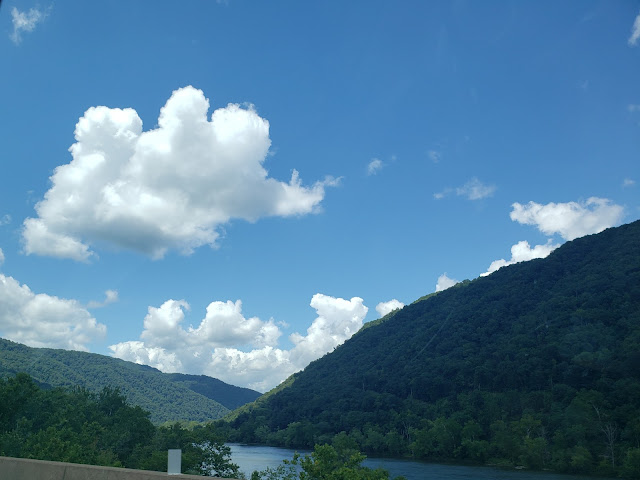 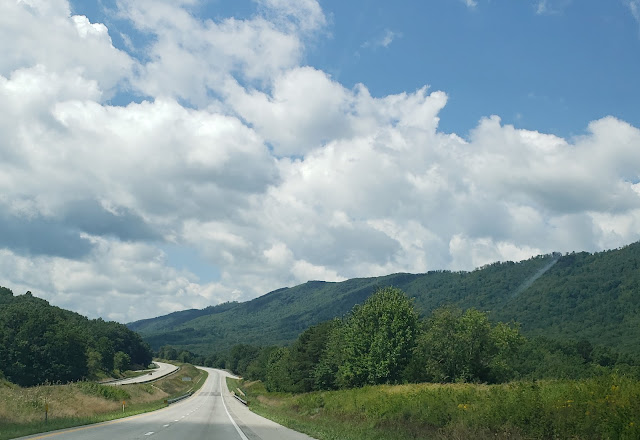 We had a little bit of rain on our way, but not too bad. This cut-through was huge! 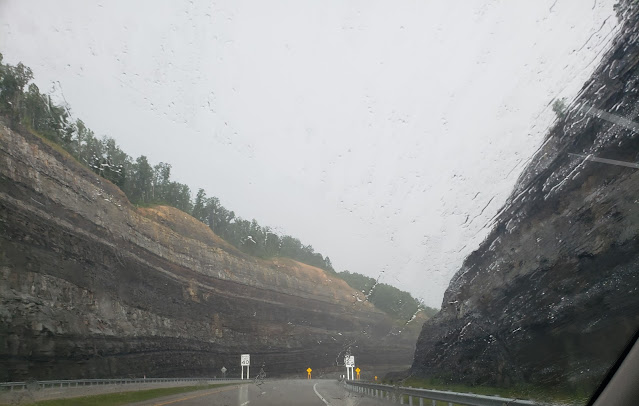 DH chose where we went this year, and it was certainly something new to us. It was about six hours away and in the middle of NOWHERE! 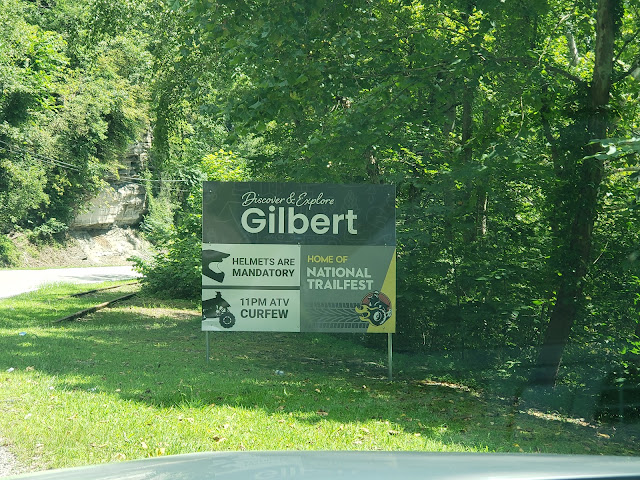 Our adventure was in Gilbert, WV, riding the Hatfield-McCoy Trails on a side-by-side (sxs). More like a trip just for the guys, but I was up for it!
Here's DH and Nathan picking it up to drive it back to the house we rented. The Gmen were coming the next day, so they'll get their own.
Notice how nice and green it looks... for now. 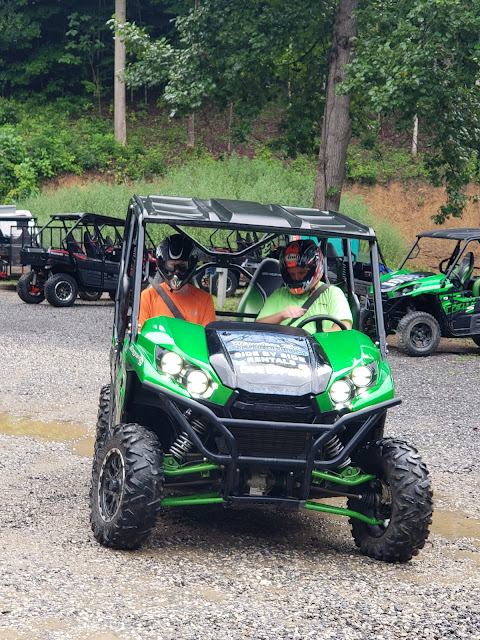 Hitting the trails, not really knowing what to expect.
Good thing DH was reading the map, it was so confusing. So many twists, turns, and plenty of bumps! 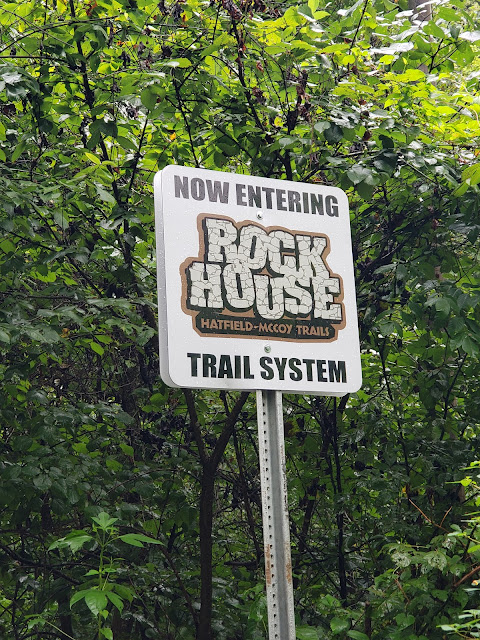 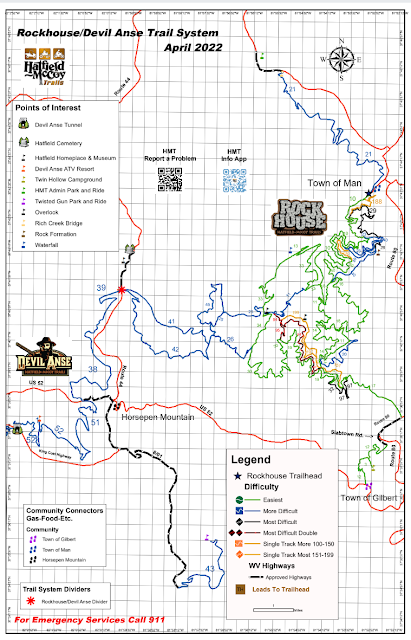 We went to a waterfall on trail 13, lovely and nice since we were the only ones there. 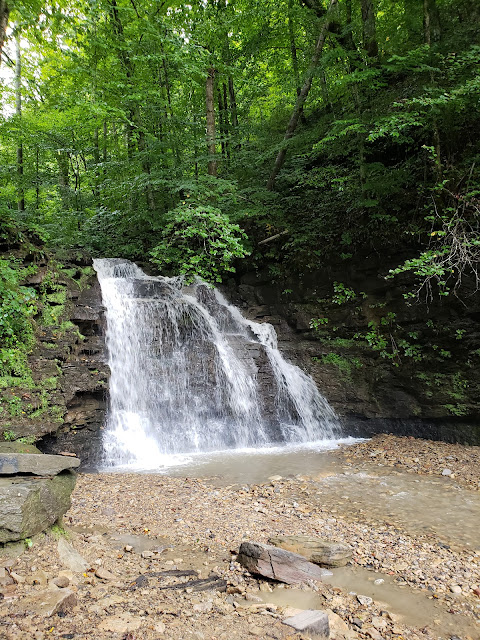 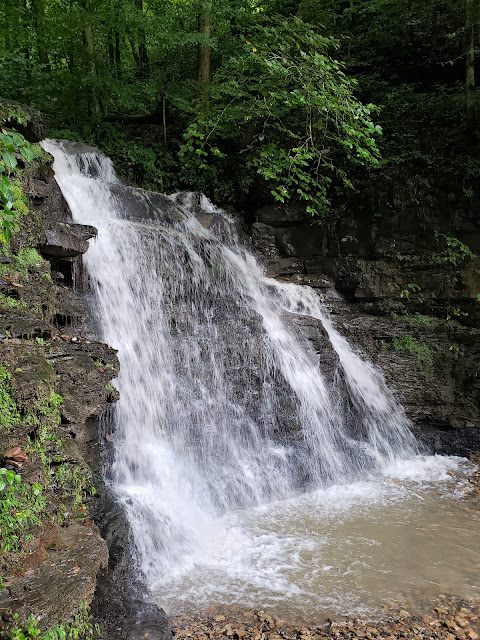 You can see how narrow the trails can get. What you might not be able to see is how fast he's going and how bumpy it is!
I think I liked sitting in the back better? I didn't get as dirty! 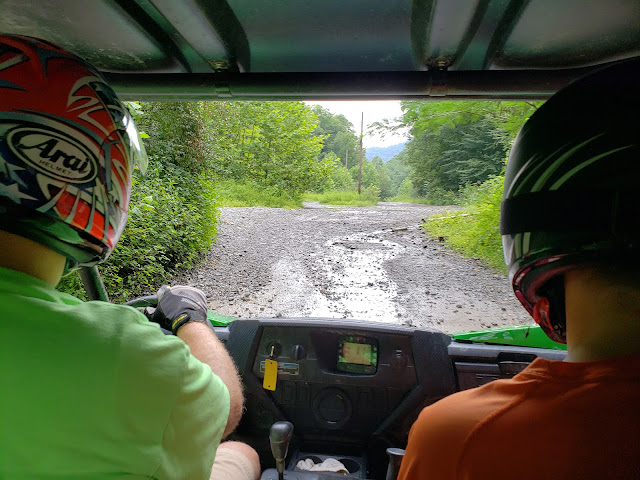 This was one of the few places to eat in town, luckily the pizza was good. 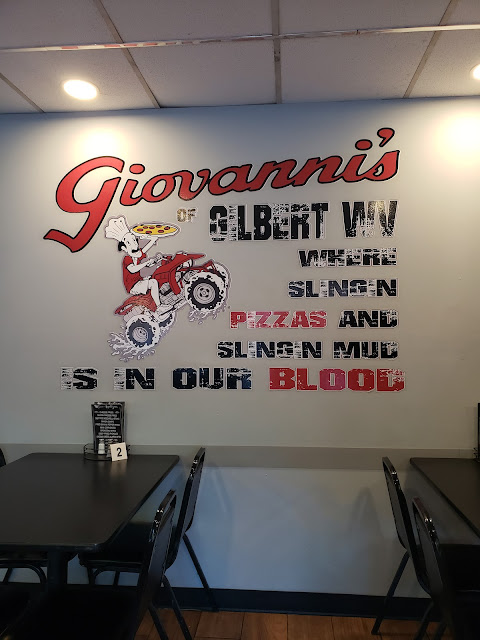 Yay, the Gman arrived the night before and joined us the next day.

Not a very good family photo, but at least we got one.

Nathan decided to join his brothers, I think Dad was going too fast for him!

This is an after photo - after Gman2 rolled the sxs on its side! They were backing up for a bigger group to pass us and he went up the hill a little too quickly. He said it was like falling in slow motion! Luckily I didn't see it happen, but I did see it on its side. DH ran out to them and I couldn't get out fast enough! I saw the Gmen and they were fine, but I couldn't see Nathan. Then he popped up through the door and said he was good, he just had a hard time unbuckling his seatbelt!
Later, Gman1 was also backing up and one of the back wheels went over the edge. Luckily one of the other vehicles had a tow rope to pull him up. I'm glad I didn't see that one! 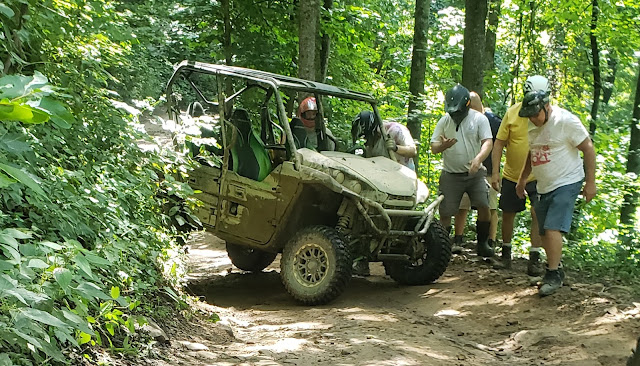 The second day DH said he wasn't playing nice anymore and went racing through almost all of the puddles! Not so bad when it was on the outside of my visor, but inside of it too?!

We actually drove into Kentucky, that made it a ten hour trip in total. Way too long for all of us except DH! 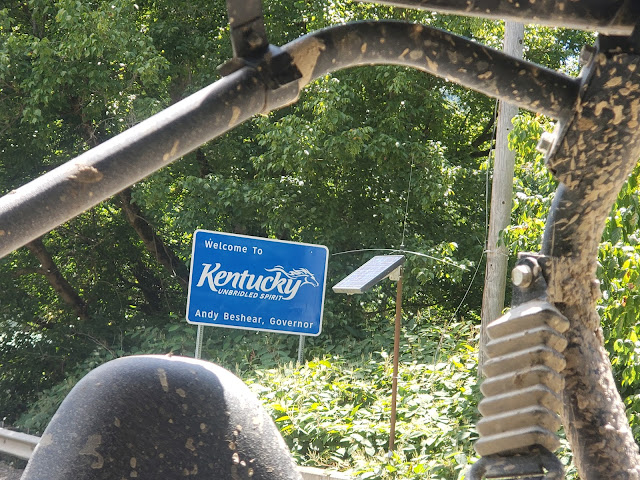 This is DH's tshirt that he wore under his shirt, and this was after it was washed! 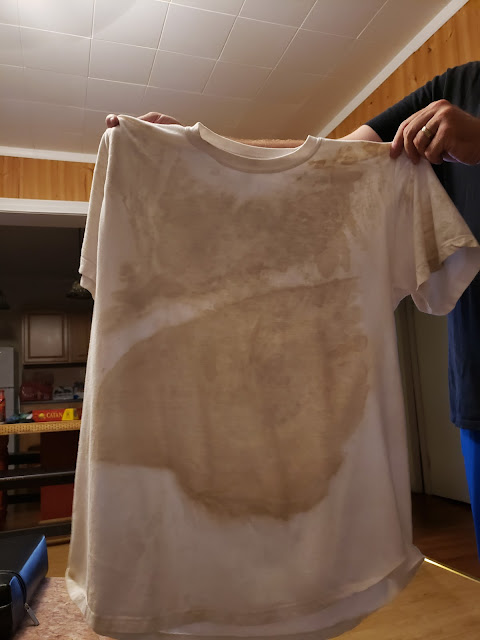 You can really see how dirty Gman2's shirt is. At least you know they were wearing their seatbelts.
You can also tell he had on goggles and the helmet didn't cover his mouth! 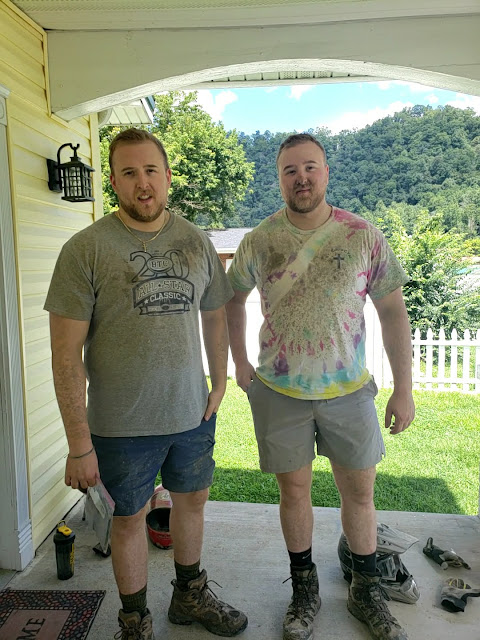 The next day, I decided I wanted to drive. 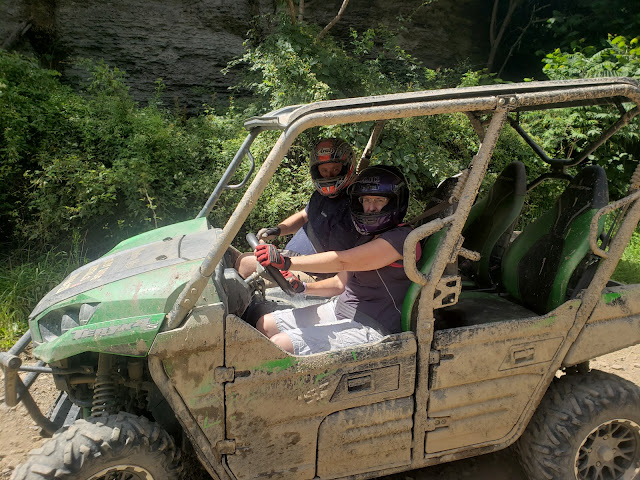 And he has the nerve to act scared! I lasted about 15 minutes, he kept wanting me to go faster! Besides that, I knew there were going to be sharp turns with the possibility of having to back up, no thanks after what happened with the Gmen. 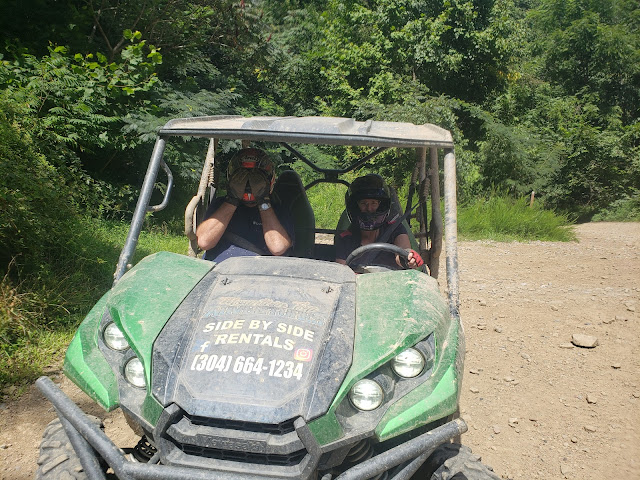 Ah, finally, a smooth ride home and I'm able to stitch while riding. 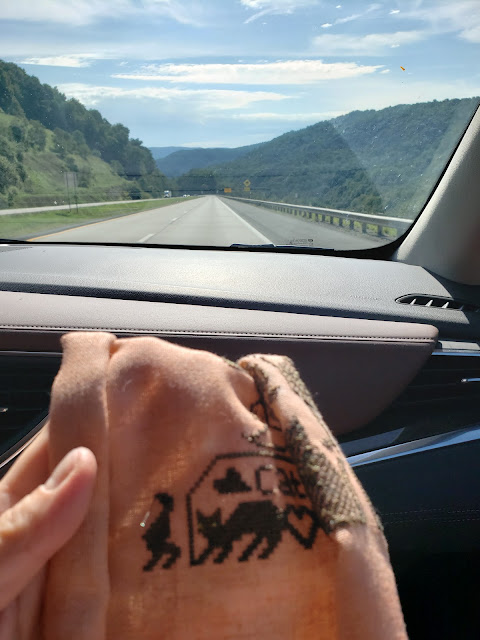 Home, along with proof that we were there! 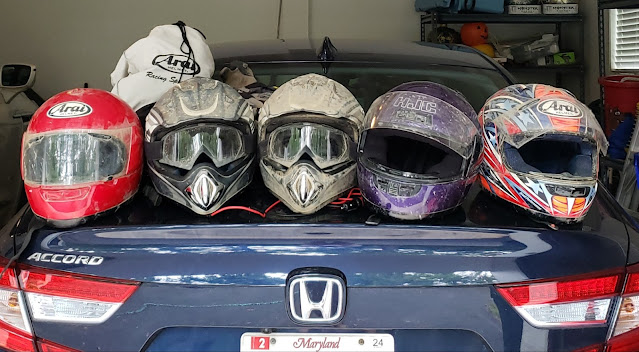 So while we were there, Nathan and I went to Walmart on Saturday (45 minutes away), and I bought some aida fabric to get WV dirty! It was much dirtier than this, but I had to wash it and this is all I got. Could be a Halloween piece, but I think it might need some more dirt? 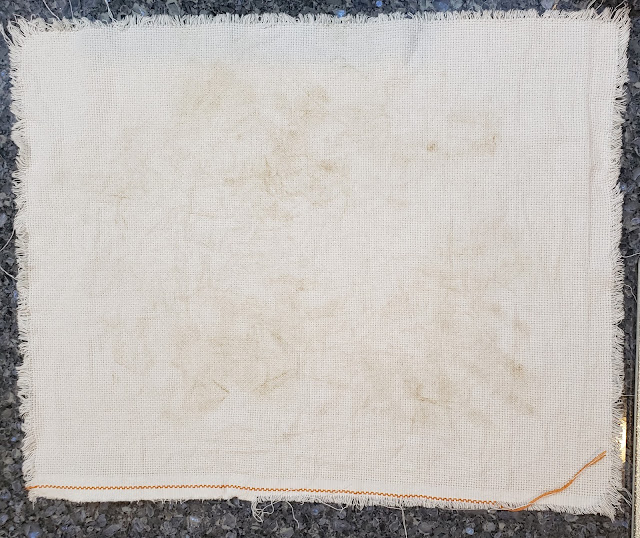 All in all, we had a fun time together but I think I'll stay home next time... stitching retreat at my house!
Scribbled by Astrids dragon at 22:25
Email ThisBlogThis!Share to TwitterShare to FacebookShare to Pinterest
Labels: Family, Halloween, Teresa Kogut, Vacation

What a trip you had!! I held my breathe at times just reading. Could your 'dirty' peice be used to stitch a momento sampler of your trip?

Wow, That looks like fun, though not sure how I feel about all the dirt splashing about!!! Glad you enjoyed yourself!

Goodness you are brave! I would definitely pass up next time. ;)

Oh wow - not something I would ever in a million years attempt to do!

Jo who can't think of a clever nickname said...

Well, that was an experience! One I think I'd pass on. Done enough motorbike riding in the rain to want to do it deliberately through mud LOL
Stitching retreat sounds good though.

That was an adventure! Glad that everyone had some fun though boy oh boy are they dirty! The falls are very pretty! Can't wait to see what you do with your dirt. Do you think it will stay on/in the fabric?

Astrid: It looks like you had a ball with mud and all.

Wow how fun. Great photos. Yeah I don't know if I would enjoy that trip either. Hubby would of course. Looks like all your boys had a blast.