I needed to finish up Mom's chapel by Thursday because I was supposed to visit with her that day. But I decided that going for the weekend instead was a better idea (and I wasn't going to be finished by then anyway!)
So I hit the Stitching Post on Tuesday and decided to fill it in with the blue and white. They're both shimmery and I thought it would be better coverage. The best part... tent stitches! 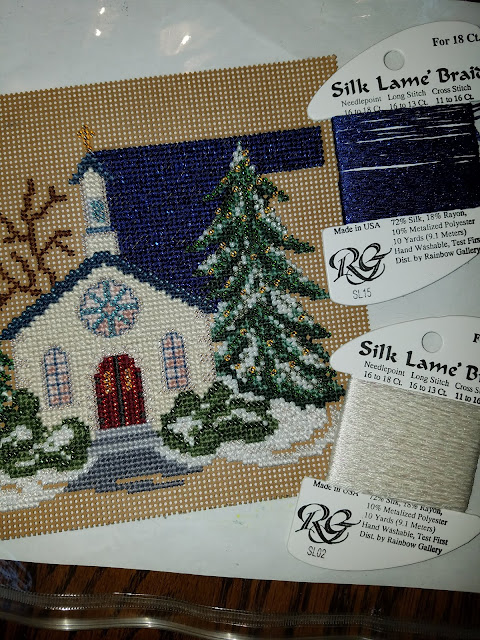 Ming and Max kept me company as usual. 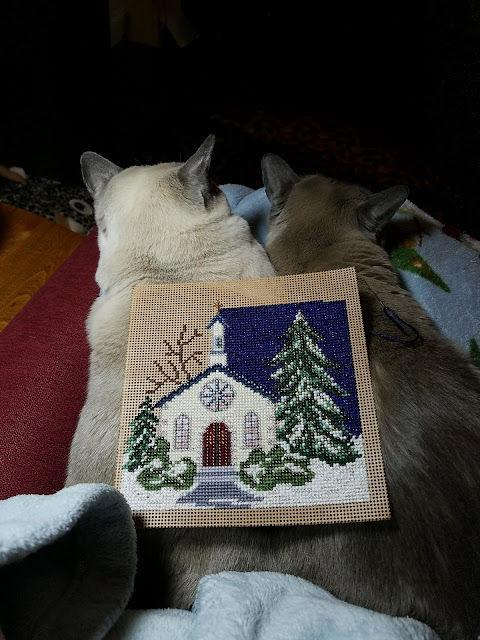 Although I did have to go back to pick up more blue 😠, I finished it on Thursday! I also picked up a Mill Hill frame while I was there, but it's really not that washed out when you actually see it. 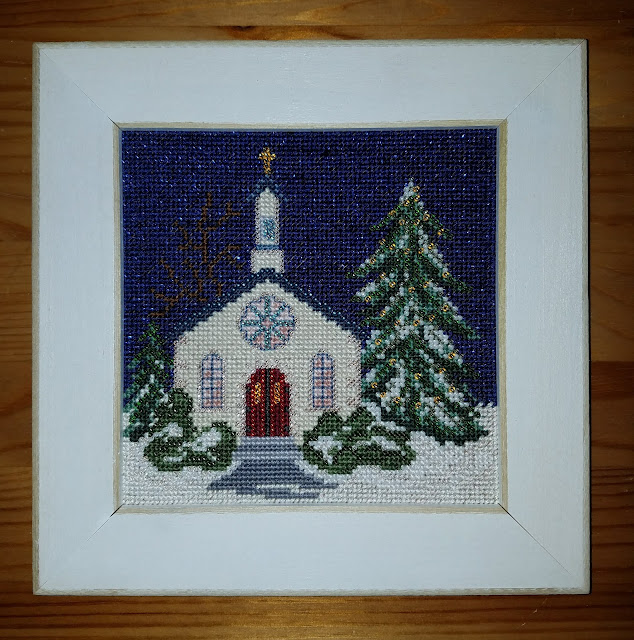 So even though her actual chapel is not as big as the stitched piece, it will do! 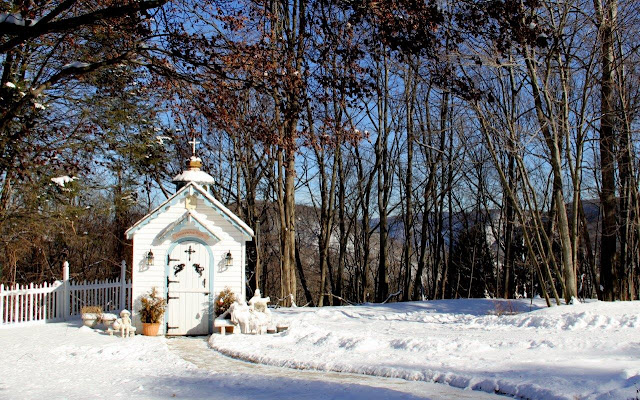 Mom was thrilled with it and it's now in her room while she's in rehab. She's doing so much better, she was almost running down the hall with her walker this afternoon! 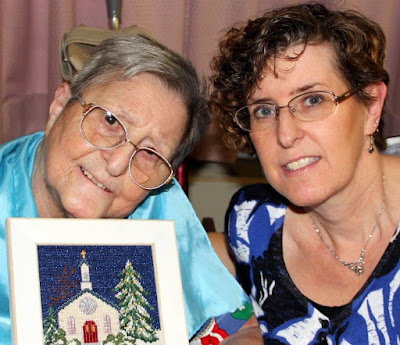 Thanks again for your prayers and best wishes for her, it worked!!!
Scribbled by Astrids dragon at 22:34 16 comments: Links to this post
Email ThisBlogThis!Share to TwitterShare to FacebookShare to Pinterest
Labels: Family, Finished

Rough start to the year 😞

Where to begin?
For Christmas, my Mother spent it in the hospital with flu that turned into pneumonia. She was discharged (and probably shouldn't have been) and readmitted with flu and bronchitis two days later.
Dad was with her when she ended up having a seizure due to having low sodium, and her heart stopped. (At least that's what they think) After CPR, she ended up in ICU on a vent. So when I went to go visit her for the day, I was expecting to see her in a regular room and instead found her in ICU.

Thanks to my wonderful friend who works at Southwest, she flew in my older brother from Louisiana. DH picked him up in Baltimore after midnight and we met halfway so he could be with Mom too.

Honestly, it all jumbles together, but at one point she was off the vent and told me to take a picture of Dad sleeping! She doesn't remember it though. 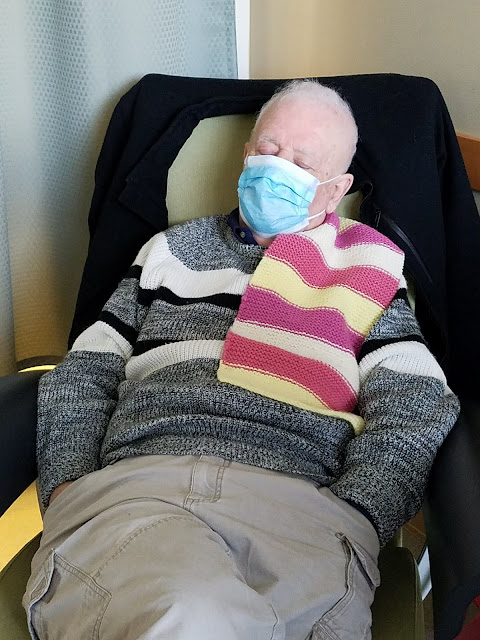 It truly was a scary time, we thought she wasn't go to make it when she was reintubated because she was having such trouble breathing.
To make a long story short, after lots of prayers being said ALL OVER the world, she's doing much better!

So along with all the upset, we had some good moments with the family, especially when we knew she was on the mend.

Although this was taken during the initial stay in ICU, here's my brother "taking care of business!" 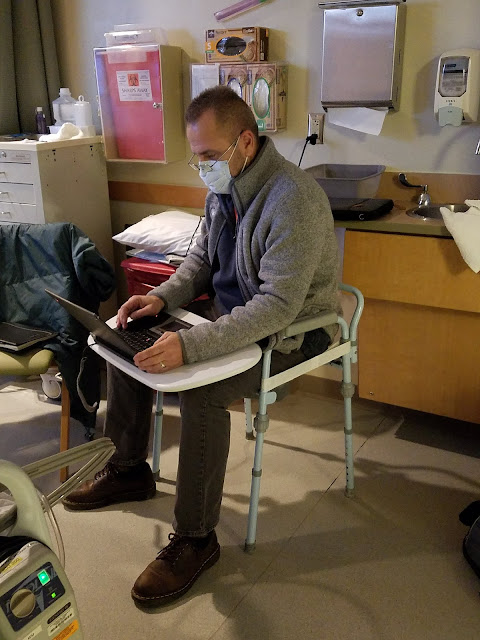 I was face-timing Nathan one night while at their house - I don't normally look like that! Tenny was missing her Momma, and I was a cheap substitute. 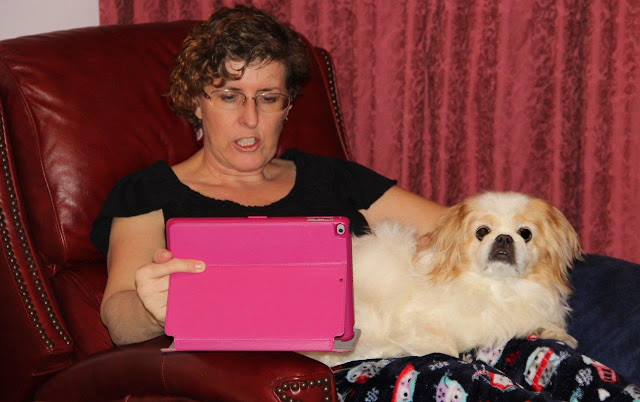 The GMen came up with Nathan the day Mom was transferred to another floor. Here we are with my nephews waiting in the lobby while she was being moved. 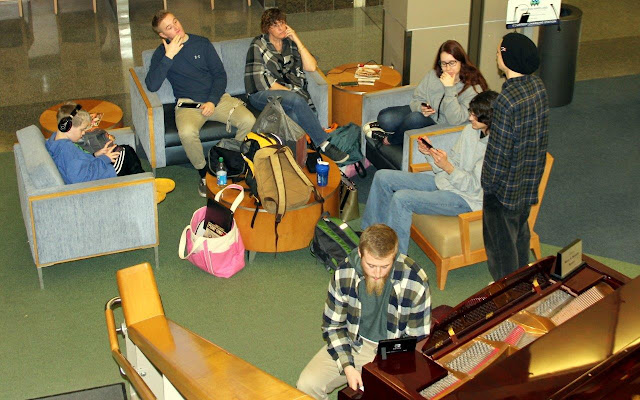 With Dad just before everyone left to go home. 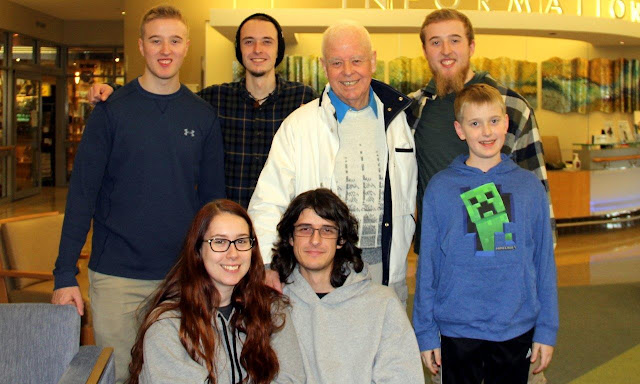 While I was there, I started this for my Mom because it reminds me of her chapel at home. 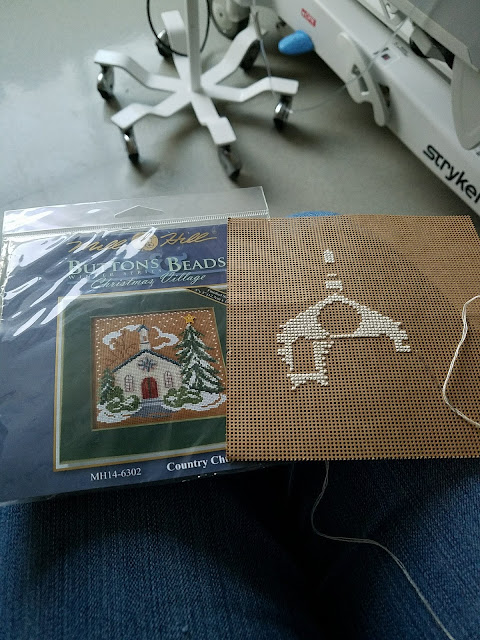 I continued during my break at home, with company. I think they missed me. 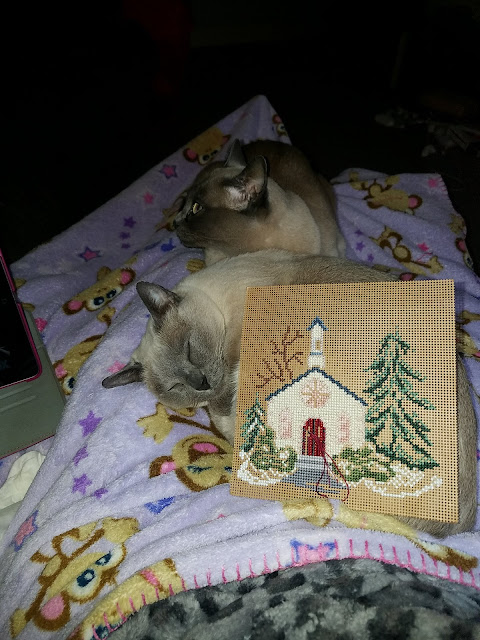 And when I went back again, I was still working on it. Mom kept asking me if I was done yet - I knew she was feeling better!

And finally, here she is settled in rehab. Dad was able to bring Tenny for a visit, I think it did both of them good! She may be there as long as a month, but with her determination, it could be less. Go Mom!
I'm planning on visiting next week. 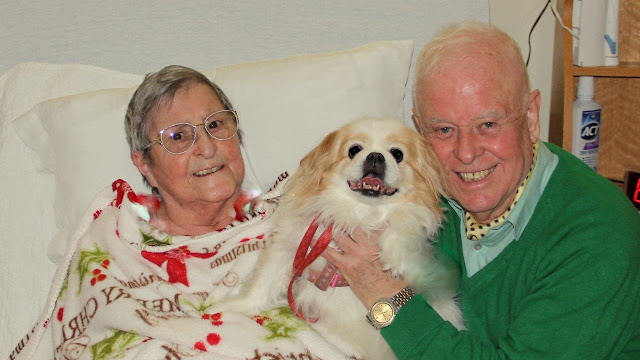 Here's the "sort of" finished chapel... but I'm not really liking the finish it's supposed to have.
I don't like that so much brown is shown in the background, I thought about adding a dark shimmering blue to make it look like it was night. Thoughts or other ideas? 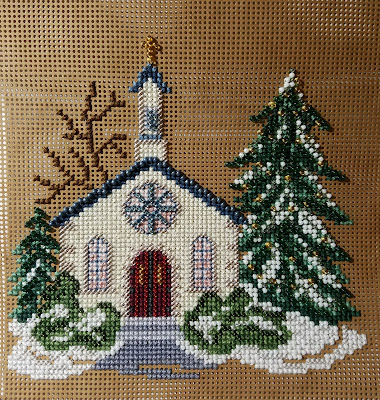 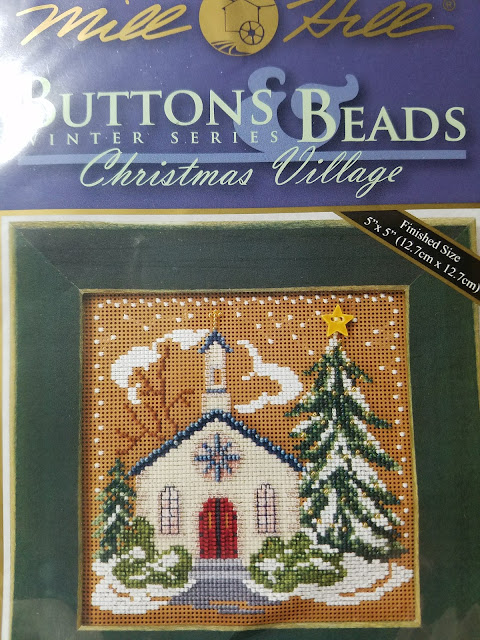 And so with all the hospital visits and being away from home, then coming back and running around doing things here, I'm way behind on reading blogs. Just when I was almost caught up!
Scribbled by Astrids dragon at 10:22 19 comments: Links to this post
Email ThisBlogThis!Share to TwitterShare to FacebookShare to Pinterest
Labels: Family

Well that went by fast!
Nathan went back to school today and he was not a happy camper. He was actually a very cold camper!

Here's some of our December.
This is the poinsettia "tree" in our mall. Although the one I remember growing up with was much taller and thinner. 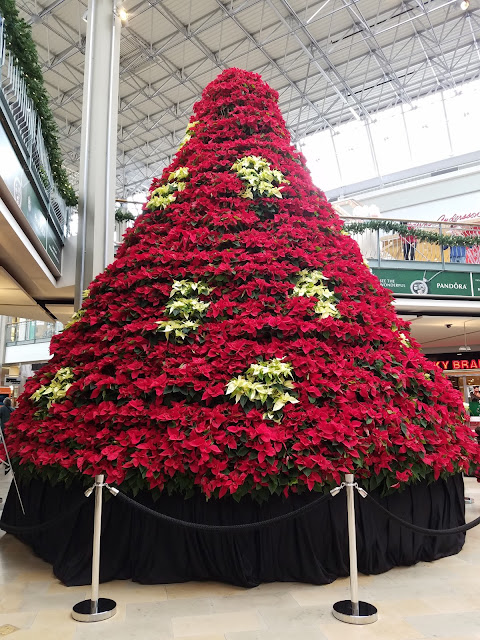 The family picture after Christmas Mass. 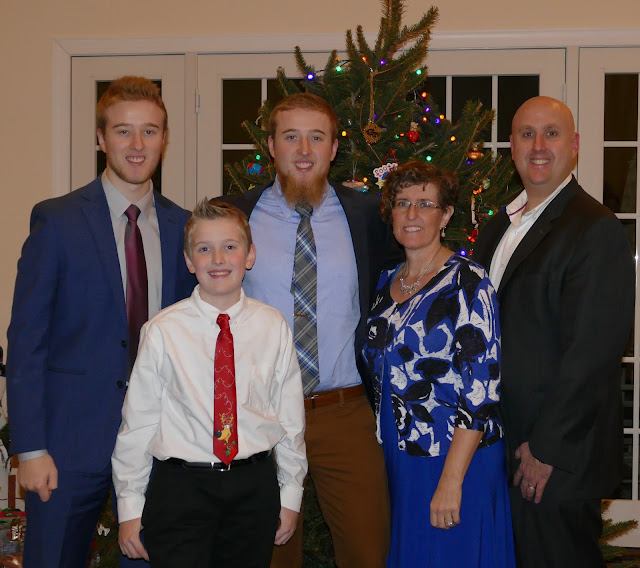 Christmas eve watching National Lampoon's Christmas Vacation - always a winner! Too bad we didn't have any eggnog to join them. 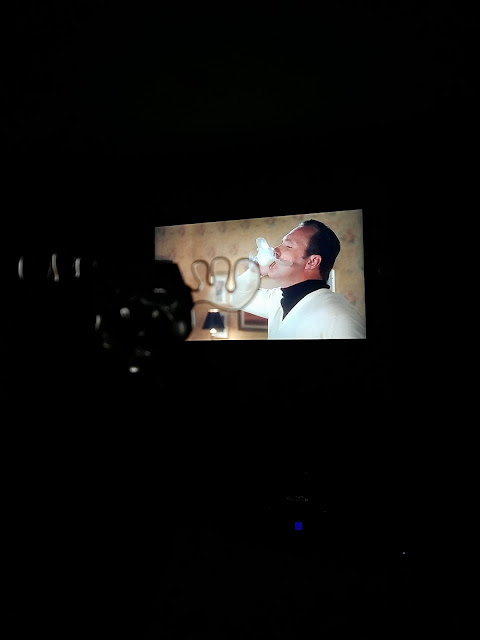 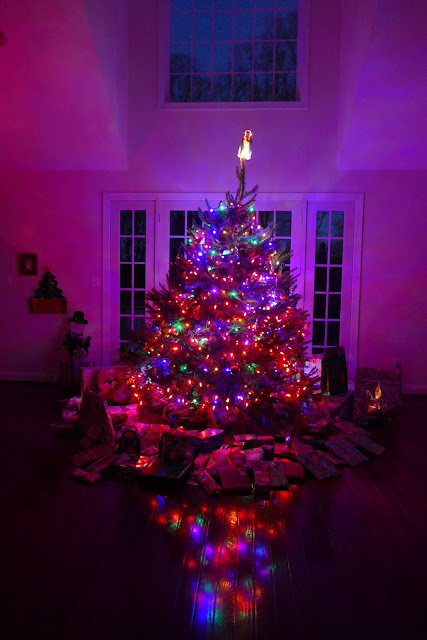 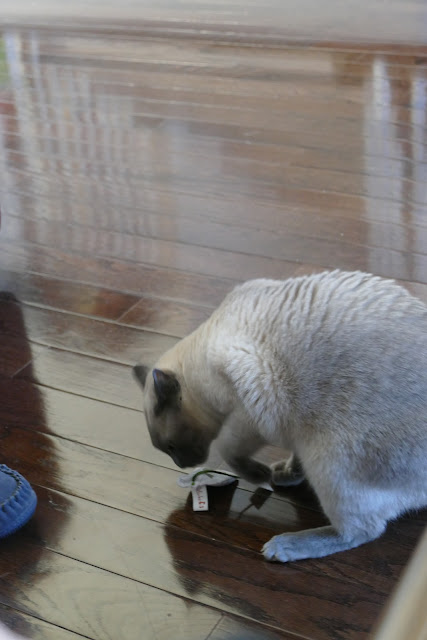 Max on a little catnip high! 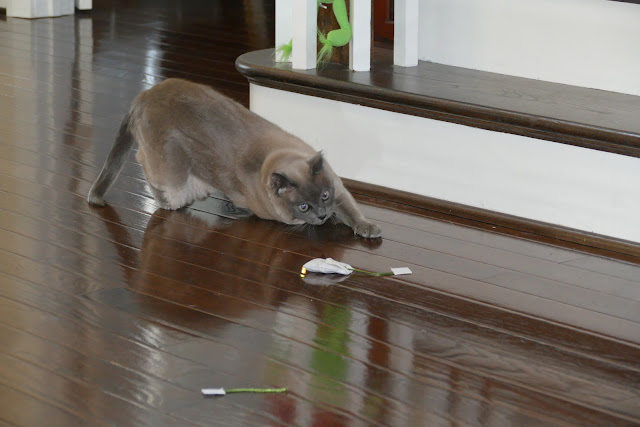 My girlfriend came over with her new pup to have dinner with us on Christmas Day. 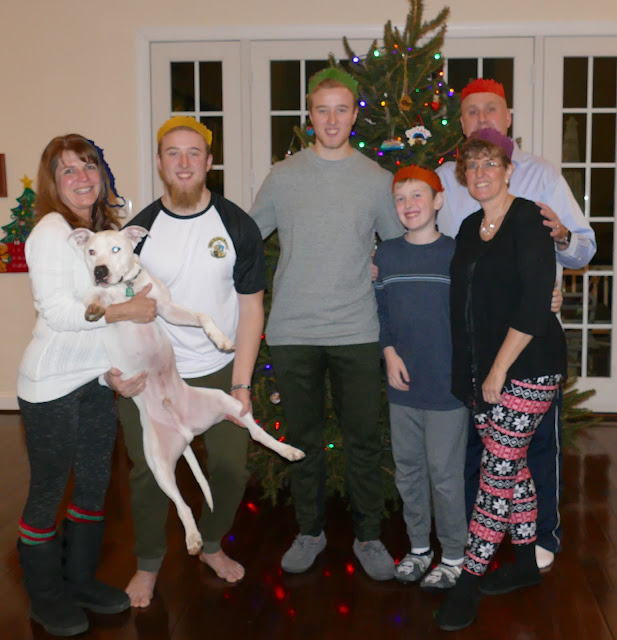 This...
I ordered this dragon shelf from Randal Spangler in October while at a craft show. It came in November and I had to wait until Christmas to open it, but it was worth it, I love it!
I still have to hang it in my craft room, but Max needed to inspect it first. 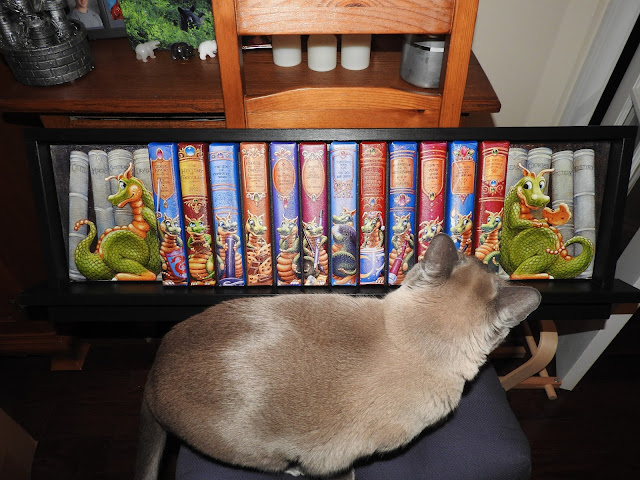 I didn't ask for any stitchy stuff, since I have enough to keep my busy for quite a while, but my girlfriend gave me this knowing I love dragons. I LOVE IT! The colours are so beautiful. 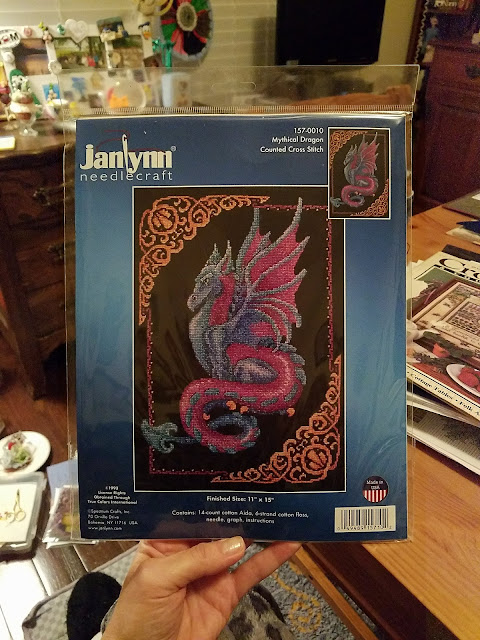 After Christmas, we headed to DC to see the National Christmas tree. We ended up visiting a couple of the museums and seeing the tree at a distance. 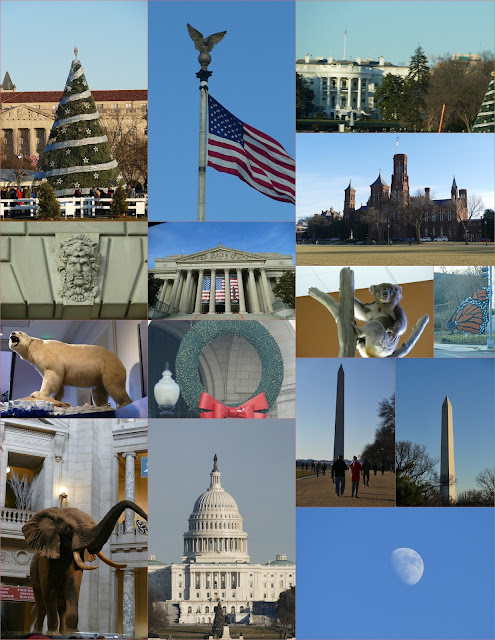 A cold day for a family selfie! 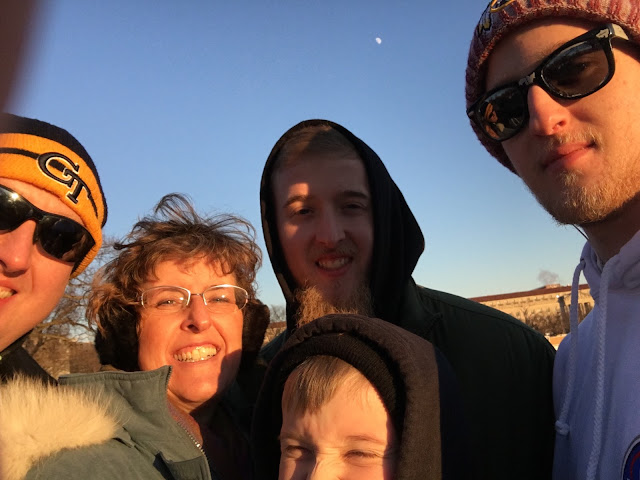 We went to a family party on the 30th, and look what I found on their tree. I made this over 20 years ago! I was slacking though, I never made her younger sister one, oops. 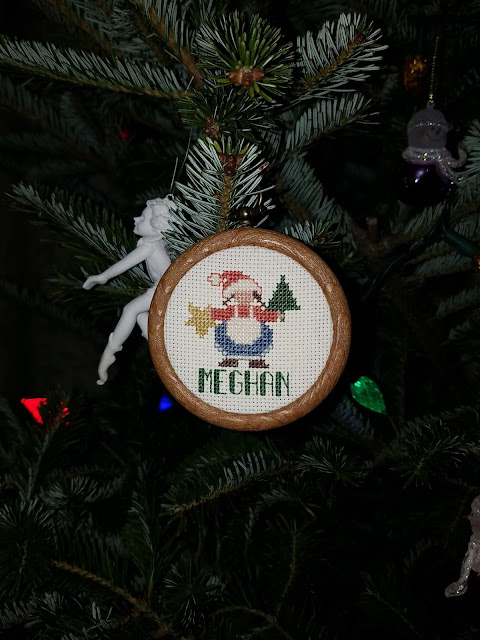 I finished this on New Year's Eve for our friends who joined us that evening. I used two patterns I had. It's kind of cramped, but I guess it worked. 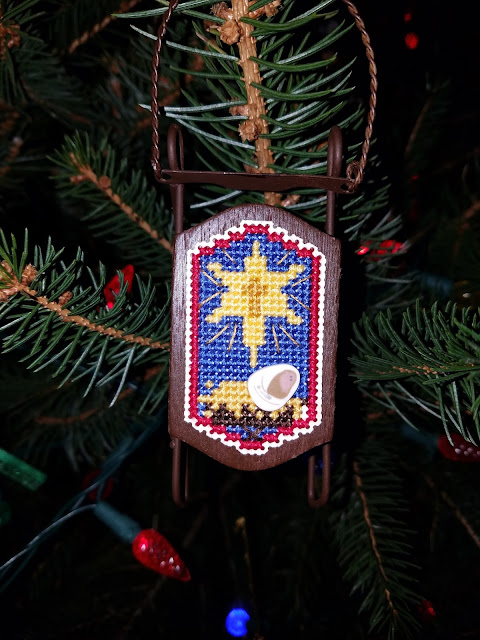 Wishing you a wonderful New Year, may it bring you everything you hope for!